Did Rapper Ice Cube just advocate for the killing of cops? Sure sounds like it. 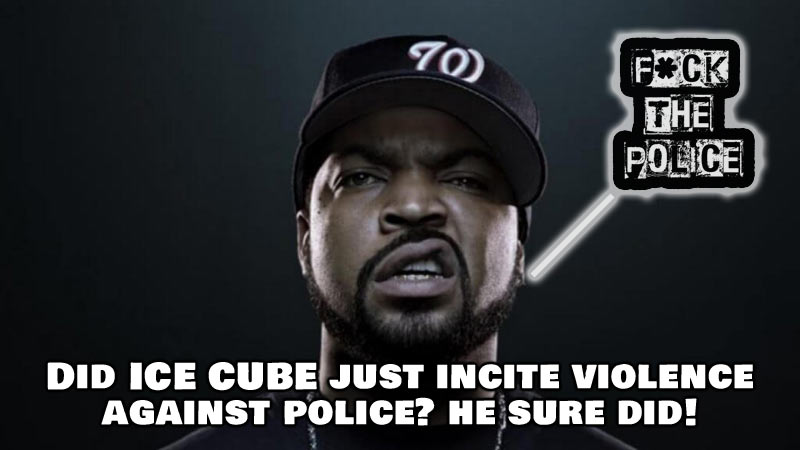 Did rapper Ice Cube just make a tweet that incites violence against the police? Sure sounded like it!

I don’t think rapper Ice Cube, real name O’Shea Jackson, has the greatest respect for our men and women in blue. In fact all you have to do is listen to some of his songs, either from his time with NWA, or during his solo career. Just of his songs, this one from 1991, is called ‘Good Cop Bad Cop‘ where he refers to police as ‘robots’ and how police lie and distort facts. He also talks about how, he believes, that skin color plays a major factor in how police act in a situation. He also promotes Black Lives Matter in the song. When he was with NWA, one of their more popular songs was “F*ck The Police“, which was released in 1988. Cube’s been hating on the police for a very long time. … Now comes the incident with George Floyd, where 4 white police officers in Minneapolis used strong-arm tactics to subdue and hold down Floyd (a black man) as they arrested him. One of the police officers knelt on Floyd’s neck, resulting in (no official autopsies yet, but the videos are quite clear) the death of the suspect, right there in the middle of the street. The suspect can be heard trying to yell out “I can’t breathe”, but the officer did NOT let up, which supposedly asphyxiated the suspect. He died on the spot.

Of course this should cause uproar, although without judgement, we have to let the justice system handle the situation. We are not a country where we use gang and mob mentality to attack the police because of an act of ignorance, even if it resulted in the death of a human being. We have a justice system and although it may not be perfect, we still need to let it take it’s course. However, and sadly, many people do not feel that way. There were massive riots across the country in response to what happened to Mr Floyd. Riots, looting, assaulting police, damaging police property, damaging public and private property, setting fire to things, … Many protesters actually stood outside of one of the officer’s house, blocking all food deliveries he was trying to get in. In this country, we DO NOT take the law into our own hands, although many obviously feel different, and don’t forget the fact that many people don’t trust ‘the system’ to handle it, thus the vigilante style riots.

And now comes rapper Ice Cube. When a public icon has the opportunity to set a good example, they should take it; Showing their mass of followers the RIGHT and MORAL way to handle things. But here we see Ice Cube doing the exact opposite. I call it ‘Inciting Violence‘ and it may just get many police officers killed. Ice Cube came out publicly and Tweeted “How long will we go for Blue on Black Crime before we strike back???” .. and first off, this incident has NOT made it’s way to court yet, so he really can not refer to it as a ‘Blue on Black Crime’. Secondly, when he said “before we strike back”, that is where I believe he crossed the line. That will give the go ahead and the OK for some of his followers to go and do just that, which is to strike back against the police. Don’t get me wrong, he does, in a way, have a good point that ANY senseless killing should NOT be happening, but why then is he advocating for more violence? Ice Cube went on to say “Being black in America should not be a death sentence. For 5 minutes we watched as a white officer pressed his knee to the neck of a black man, for 5 minutes. When you hear someone calling for help, you are supposed to help, this officer failed in the most basic human sense.”. Several hours after the first video of the incident went viral, Minneapolis Mayor Jacob Frey announced the firings of four Minneapolis Police Department officers that were involved. … So as we sit and wait for the justice system to handle this (the FBI is now investigating), we now need to worry about one of Ice Cube’s followers taking his advice and going out to hurt the police. .. If something happens due to the rhetoric from Ice Cube, should HE be held personally responsible? COMMENT BELOW

If someone does something illegal due to what Ice Cube ‘preached’, then yes, he should be held accountable.

This group should be called the unapologetic sheep.

Awww.. Poor Johnny … Did we offend you, you precious snowflake? HAHAHAHAHA! 40,000 pissed off conservatives are NOT sheep. … So annoyed that you can’t even keep a stupid comment like that to yourself. You just HAD to post it, right? … Typical LEFT LIBERAL SHEEP. 🙂

Oh, and Greeley, Colorado is EMBARRASSED to have you as a resident! … Actually, I have a few friends out there … Maybe time for a little vaca 🙂