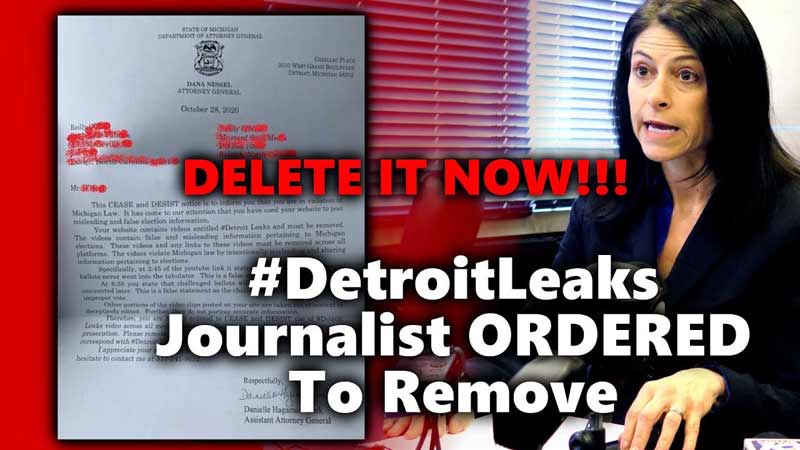 An organization named Big League Politics and reporter Shane Trejo received shocking news that recent voter fraud news pieces they released, which have eyewitnesses and proof, may get them thrown in prison. Dana Nessel, the Attorney General for the state of Michigan, has threatened the journalist with a Cease and Desist Order if the voter fraud articles do not stop. The journalist will be charged with criminal prosecution the Order said. You can find many of these ‘reports’ and revelations using the hashtag #DetroitLeaks which details the state’s training content of their vote-counting staff. The content in the reports easily displays how the state trains their poll workers on different ways of conducting voter fraud. So of course the Attorney General doesn’t want the public to see the truth, so the journalist gets threatened. This ‘training’ took place before the General Election.

Shane Trejo, the brave journalist who reported the voter fraud, was also a witness to it himself in Detroit. Trejo said that he believes that the ‘threat’ from the Attorney General is in fact witness intimidation He fears that the AG is just trying to cover up the facts of the crimes that took place. 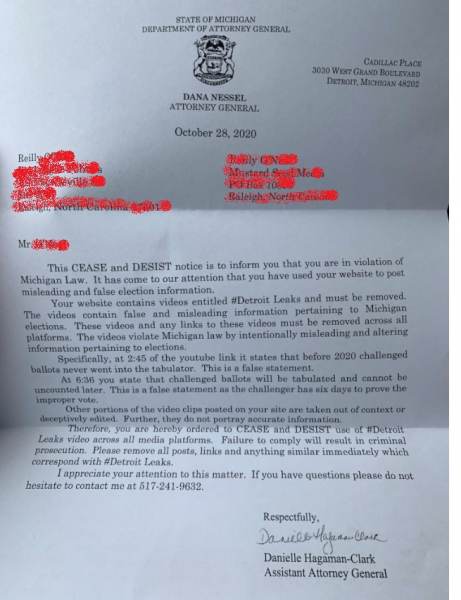 The Cease & Desist letter was delivered on October 28th, several days before the election. In the letter, the Michigan Attorney General points out that Trejo’s report contains multiple errors and is inconsistent, thereby requesting that every article related to #DetroitLeaks be deleted from the Internet on behalf of the Michigan government.

The #DetroitLeaks report demonstrates that Detroit poll workers did in fact receive training on how to outright lie. They were also trained on how to deal with Trump supporters and any questions about the trustfulness of the voting process for this election. The same exact poll workers were instructed to call 911 to any opposition, and use the COVID-19 virus outbreak as an excuse to refuse to allow people to check their votes.

The information in the reports also shows that the poll workers were trained to handle disputed votes the same as regular votes (which they are not supposed to do). State representative Steve Carra and Michigan activist Bob Cushman filed a successful lawsuit against Michigan Secretary of State Jocelyn Benson, which accused the state of training polling workers on how to conduct voter fraud.

Multiple independent witnesses approached The Gateway Pundit and confirmed that the accusations made in #DetroitLeaks was 100% accurate, and that the vote counting of Wayne County/Detroit at the TCF Center (aka Cobo Hall) was conducted by poll workers who refused to accept the challenge. They outright refused to allow their counting to be monitored and they added questionable ballots to the main ballot lot. They did exactly as #DetroitLeaks said they did.

*Newly Obtained!* – Leaked Audio from a Training Session of Poll Workers in Michigan

We have to stand against all this!! For ALL our CHILDRENS future!!!