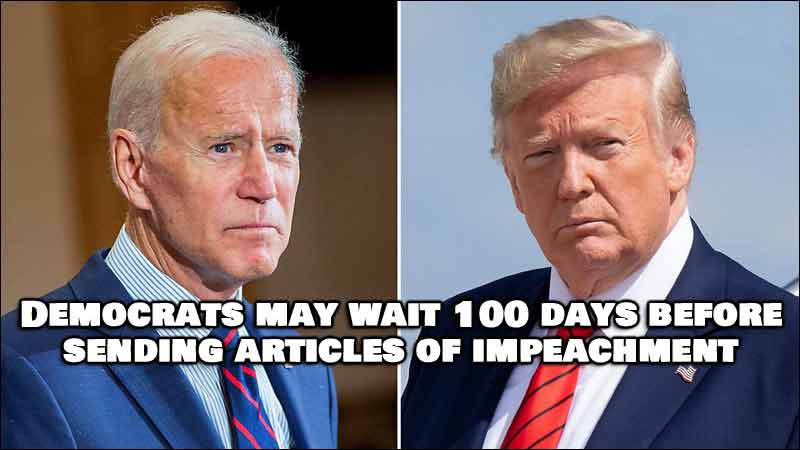 With Republicans needing a miracle at this point to prevent Joe Biden from stepping foot in the White House, Democrats feel confident in preparing as if it will happen. Today House Majority Whip James Clyburn stated House Democrats may decide to wait until after “President-elect” Joe Biden’s first 100 days in office to bring forth any potential articles of impeachment against President Donald Trump to the Senate. The main purpose for the delay is just to give Biden time to really implement his socialist agenda and help be the catalyst in the downfall of America.

“We’ll take the vote that we should take in the House, and (House Speaker Nancy Pelosi) will make the determination as to when is the best time to get that vote and get the managers appointed and move that legislation over to the Senate,” Clyburn stated. He continued, “It just so happens that if it didn’t go over there for 100 days, it could – let’s give President-elect Biden the 100 days he needs to get his agenda off and running, and maybe we’ll send the articles sometime after that.”

Nancy Pelosi (one of the most vile fraudulent politicians I have ever witnessed) stated last Friday that she has every intention on bringing forth Trump’s impeachment, stating it is her intention is to have the voting done by Wednesday.

RINO Senate Majority Leader Mitch McConnell previously made it known that even if the House moved quickly to impeach Trump, the Senate would not return to session prior to January 19. That would put the beginning of the trial on January 20 — the date of Biden’s alleged inauguration.

Regardless of what happens, it is obvious the Democrats fear Trump. Impeaching him will be their last ditch effort to make sure he isn’t able to come back and save America In 2024. We will continue to update you moving forward as more information becomes available.

Dirshowitz said they can’t impeach a private citizen…. which Trump would be

I hope that President Trump has a trip card to play for the senate’s house. I hope he has enough evidence to blow the democratic party out of the water.

There is a reason why the democrats are called democrats. One,they demo everything they touch and for the crafts
part of their party, they procrastanate is their game.