Democrats are Stealing the Presidential Election Right In Front Of Our Eyes. 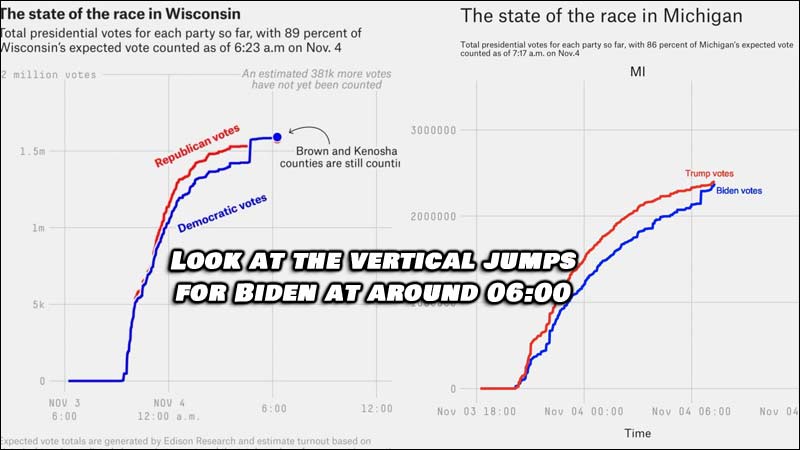 The Presidential Election that began last night, and is STILL going on is probably the most absurd election meddling I have ever seen. There are still a small handful of states that are refusing to concede a winner. For example, it’s a whole day past the election and Trump has a big lead in Pennsylvania, yet the Secretary of State there just came out and announced ‘there are still millions of ballots left to be counted’. Oh, how convenient that all of a sudden we are told there are still millions of ballots to be counted, when larger populated states, such as NJ, are already done with their counts, and note that NJ was ALL mail-in votes which all had to be counted by hand. So what is taking Pennsylvania so long? Why all of a sudden are there millions of uncounted ballots?

Before the election, rumors swirled at the lengths Democrats would go to, to win this election. Many, including President Trump himself, said that the ‘forced’ mail-in voting would create a huge opportunity to cheat, and that’s just what we are seeing. In some of the states Trump was winning, all of a sudden they stopped counting, said they were overwhelmed by the counting, then all of a sudden Biden was in the lead. Way too sketchy for me personally! Each side was quite confident before the election. Biden’s team talked as if he had already won, and he barely did any campaigning. When he did, the ‘crowds’ of people were just not there; Photos showed empty lots where Joe Biden spoke. On the other hand, Trump rallies had floods and floods of people. If the election was solely based on campaign rally turnouts, Trump would have easily crushed Joe Biden.

Compared to back in 2016, the American public’s support for President Trump has risen sharply in 2020. In late 2020 as the election neared, people held their own personal Trump rallies and some of them drew thousands of people. To be honest, I did not see even one for Joe Biden. From the outside, it appeared as if Joe Biden was going to get crushed in the election. It also appeared as if that would come true until a few strange things happened.

First, Trump managed to win 5 out of the 7 swing states. That must have pushed a few Democrats over the edge because in a handful of Democratic run States, the Governors completely halted the ballot counting, and refused to announce final results. Then, miraculously, within a very short period of time, the vote counts for Joe Biden rose by huge numbers while not another candidate got one. In Michigan, Biden’s votes leaped up, exploding by 128,000. Not a single change was made to Trump or the other candidates. The same process happened in Wisconsin too. Joe Biden’s vote count increased by about 140,000 in a blink of an eye. In fact the number of actual votes in Wisconsin has exceeded the number of registered voters! Ummm, can anyone say VOTER FRAUD??

As of this writing, still no final results have been released, not even for the House or the Senate. This is INSANE. .. Opinions?? Please comment below.