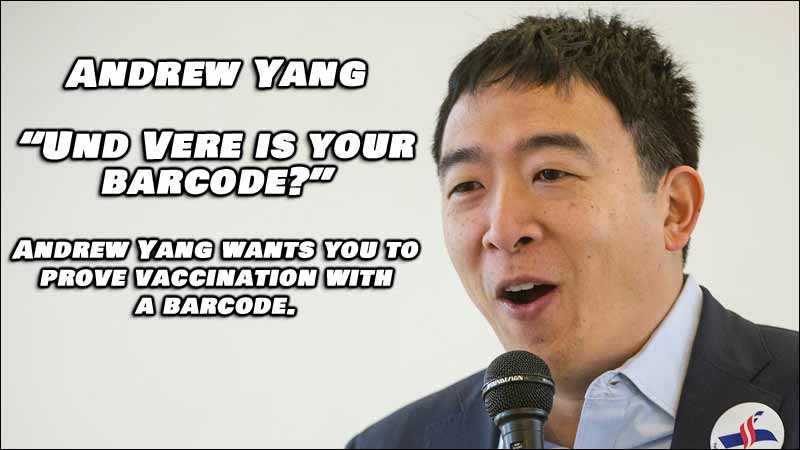 “Und Vere Are Your Barcodes?” is a question we can expect to come from some sort of law enforcement if it was left up to Democratic loser Andrew Yang. Yes, the same Andrew Yang that ran on the Democratic ticket for President of the United States and could not even hold 1% of the vote, asked yesterday if using barcodes to identify people who have received the COVID vaccine was possible. Yang, a way Left leaning loon, is actually gearing up to run for mayor of New York City. He seeks to de-throne the very unpopular Bill de Blasio, but I honestly don’t think that NYC is ready for another Liberal, especially one like Andrew Yang. The backlash Yang received about his ‘bar code’ statement was almost immediate. Many people compared it to the same way Nazi Germany did their ‘papers’ check to see if you were labeled as a ‘Jew’. In Nazi Germany, Jews had to carry papers, they also had serial numbers tattooed onto their arms, and they were forced to wear a crude Star of David (yellow with 6 points) sewn or pinned onto their jackets. Is this where Andrew Yang wants to take our country?? His exact December 18th tweet (see below) said “Is there a way for someone to easily show that they have been vaccinated – like a bar code they can download to their phone? There ought to be.”

Is there a way for someone to easily show that they have been vaccinated – like a bar code they can download to their phone? There ought to be.

Yang went on to explain that if everyone had some sort of symbol displayed that said ‘Hey, I got the vaccine!’, then everyone can “interact more freely. It’s tough to have mass gatherings like concerts or ballgames without either mass adoption of the vaccine or a means of signaling. I’ve been tested at a photo shoot or interview and gotten a bracelet showing I was negative. Then we could interact more freely.“

The lash back was quick. ‘Rose Unplugged’ wrote back “Or… Why not just pin a star to our jackets…“

Or… Why not just pin a star to our jackets… https://t.co/zDpNBlkcRG

A person referred to as @_Mrs_Farnum wrote “Something like a tattoo on your forearm? I think that’s got some staying power.” .. Referring to the serial numbers that Nazi Germany used to Tattoo on their prisoners. (See Tweet Below)

Something like a tattoo on your forearm? I think that’s got some staying power. pic.twitter.com/J0zil3IIof

What are your thoughts on what Andrew Yang said?? Please let us know in the comments below.