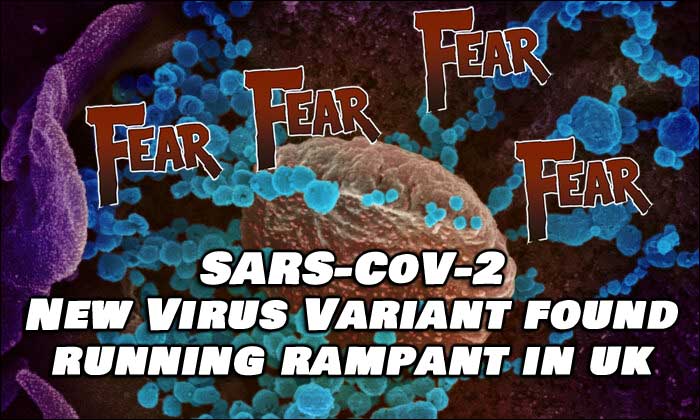 Multiple vaccines are now available for the COVID-19 virus, and many of the sheep are flocking to it. There’s been some reports of strange and scary side effects, but people just don’t seem afraid. At least the people who want the vaccine don’t seem to be afraid. It’s possible that the ‘fear’ level people had of the virus had recently decreased due to these vaccines becoming available, and so here comes the next ‘plan of attack‘; A new ‘variant‘ of the Chinese Virus has been identified over in the United Kingdom. According to Boris Johnson, their Prime Minister, this brand new variant ‘could be 70 percent more transmissible‘ than the one we just experienced. it’s being referred to as ‘SARS-CoV-2‘.

Matt Hancock, who is the UK Health Minister, said that it is necessary for them to tighter their restrictions due to “a new variant of the CCP virus detected in England earlier this year” and has “gone out of control“. At first, the government there had eased up on restrictions and residents were happy due to the fact that the holidays were approaching and they’d be allowed to congregate. However that has now been reversed, and large areas of South London would go back under what they refer to as ‘Tier 4‘ restrictions. ‘Tier 4’ is very similar to the lockdown that occurred in all of England back in November. Hancock stated in an interview “The new variant is out of control and we need to bring it under control, and this news about the new variant has been an incredibly difficult end to frankly an awful year. … What I’d say to every single person is that if you act like you have the virus, then that will stop the virus from spreading to others.“

On Sunday, December 20th, both The Netherlands and Belgium began to ban flights coming from the United Kingdom. They hope to stop any spread of the new variant outside of where it presently is. As part of the tightening of restrictions mentioned above, the old rule that permitted up to 3 (three) households to get together over a 5 day span, was reduced to Christmas Day only. People were also told “In England, those living in Tier 4 areas should not mix with anyone outside their own household at Christmas.“. Hancock told people that he did not want to take the measures of canceling Christmas, but he feels it’s his duty to take some measures and action.