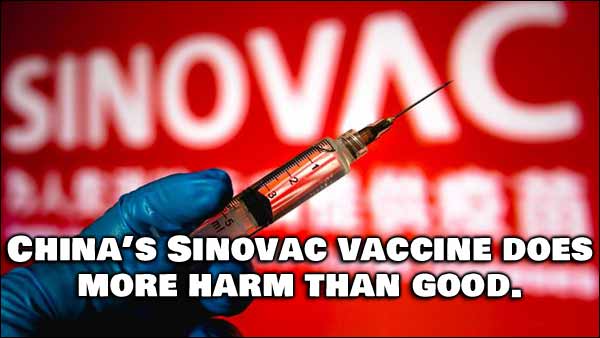 History has shown us that it takes a good 10-20 years (sometimes even longer) to come up with a FDA approved vaccine. The vaccines presently available for COVID-19 were ‘pushed through’ a fast track so that it could be provided to people as soon as possible. No matter who the manufacturer is, there was only a matter of months involved in getting these vaccines out to the public. Also, let’s not kid ourselves. Even though the present ‘sitting president’ Joe Biden has stated on multiple occasions that the vaccine was NOT available until after he became president, we all know that it was President Trump and his ‘Operation Warp Speed‘ that was the ‘miracle’ that brought forth the vaccines so quickly. How quickly Joe Biden forgets that he received both of his vaccine doses BEFORE he even stepped foot into the White House.

In the U.S. we have Johnson & Johnson, Moderna, and Pfizer (with BioNTech) vaccines. In China, they are using a vaccine manufactured by a company named Sinovac. The Sinovac vaccine has been a hot subject in China ever since it was approved to be used. It allegedly only has about a 78% success rate, compared to the US which ranged between 90% and 95% depending on the manufacturer. “Success rate”? I don’t even think they know what that means. All I know is that I read about enough side effects that have happened for me to know that I will be passing on the vaccine. Going back to China’s sinovac vaccine, there’s been many reports of negative side effects. On the 3rd of March, a 51 year old man from Hong Kong received his Sinovac vaccine at the Community Vaccination Centre at Yuen Wo Road Sports Centre. According to The Epoch Times, the man immediately experienced shortness of breath and began to cough heavily along with expelling a lot of phlegm. On the 6th, 3 days later, his lungs appeared to be over-lining themselves with mucus and breathing was becoming almost impossible. The man went for medical attention and on the 8th was hospitalized at Queen Elizabeth Hospital. An initial diagnosis was “acute myocardial infarction” and he was moved to the ICU and supposedly remains in that condition today.

In Hong Kong, as of a few days ago, approximately 103,000 people got their first dose of the vaccine. Out of those, records show that 101,000 received the Sinovac vaccine. Hong Kong’s vaccine program started back on February 26th, and since then 3 people have reportedly died after getting the Sinovac vaccine. 2 additional senior citizens were moved to an ICU and are also in critical condition. At least these are the numbers we are being told by China. I have a sneaky suspicion the real numbers are much worse. China really doesn’t have a history of being honest with us. After a bit of information digging, the Hong Kong Centre for Health Protection shows that as of the end of the day on March 5th, there were 45 unanticipated and serious abnormal events involving hospitalization after vaccination, mainly dizziness, palpitations and chest discomfort, and another 16 non-serious abnormal events, such as headache and physical fatigue. … Thoughts? Feel free to drop your comments below.