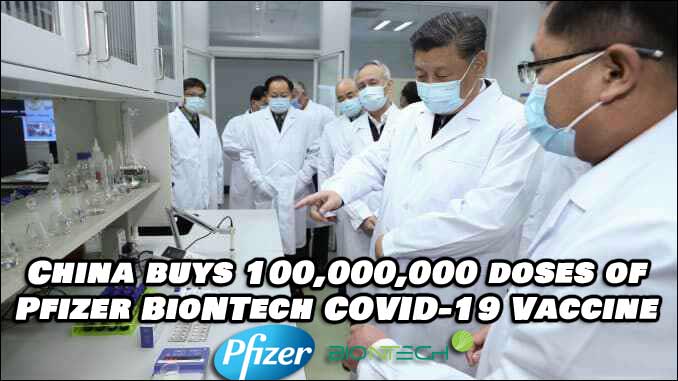 China tried its best to hide the spread and impact of the coronavirus, but they didn’t do that good of a job keeping a lid on things. We know they were hard hit, we know the Capital Wuhan (where the virus was created & released) was hit hard. At one point it appeared that China actually stopped reporting cases of infection & death because their numbers just froze and sat, as the rest of the world’s Covid-19 cases exploded.

If things were ‘that good’ in China, then logic would figure that people are healthy there and that they must have the virus under control. Well, that’s what China wanted you to think; In fact they even denied it came from Wuhan even though contact tracing proved it was its origin. HOWEVER, we just come to find out (through Breitbart News) that Shanghai Fosun Pharmaceutical Group (a pharmaceutical outfit in China) just inked a deal with BioNTech (Pfizer’s partner in the research, development & creating of their Covid-19 Vaccine) for over 100,000,000 (One Hundred Million) doses of their vaccine. If you were not aware, Pfizer’s / BioNTech’s vaccine was the first in the United States to be approved by the FDA. Since China made the deal directly with BioNTech, it appears that manufacturing will take place out of Germany (Not the United States of America), which is where BioNTech heavily operates from.

Now here comes China though with their usual routine. STEAL the idea, and make it themselves. Shanghai Fosun (who ordered the doses of vaccines) is part owner of another company named Sinopharm Group. The other part owner of Shanghai Fosun, is the CCP themselves (Chinese Communist Party). Sinopharm Group is presently trying to develop their own vaccine against coronavirus. So think about that, a Chinese company who is trying to come up with their own vaccine, just ordered over 100 million doses of another company’s vaccine from outside their country. … Sneaky little bastards, arent they??

When Pfizer and BioNTech released the news about their vaccine, they touted an effective rate of about 95%. But the best that Sinopharm Group was able to do with their own was about 86%. The Chinese are jealous, and pissed off. Usually they lead the way, but not in this situation. It’s quite obvious that the Chinese do not have that much confidence in their domestic made vaccine. They tried to test their product (Sinovac) in Brazil, but the Brazilian Health Regulatory Agency said there is lack of evidence to convince them do actually carry out the mass tests of the vaccine made by China.

Even though Brazil pointed out to China that they have lack of evidence that the Sinovac Vaccine is even 86% effective, Gao Fu, who is the head of China’s Center for Disease Control and Prevention, came out and said “Pfizer and Moderna said their vaccines were very effective, but please trust me, the Chinese vaccines are very effective, too.”. But as we have learned, who the hell trusts ANYTHING China says?? I surely do not. … Have an opinion? Please let us know in the comments below.