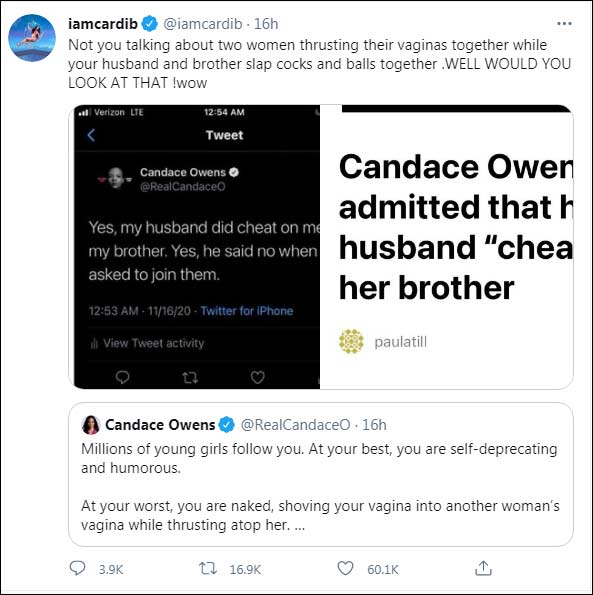 If you ever doubted the ‘book smart’ intelligence of entertainer Cardi B, here comes a zinger that will sink your doubt even further. A small social media battle sprung up recently between conservative, possible future Presidential candidate, Candace Owens and music rap, hip-hip ‘star’ Cardi B. In this ‘cancel culture’ of non-politically correct things, the public had been quite on edge lately. With the canceling of classic animated cartoon characters, to longtime children books, to just about anything that offends the Left, people seem too eager to criticize and cancel. But if we are going to cancel beloved cartoon characters for acting offensively, then shouldn’t we be doing it to real life situations with human beings? We can cancel a French skunk cartoon character for being too ‘aggressively womanizing’, but on the Grammy Awards it is 100% OK to celebrate and perform a song called WAP, or Wet Ass Pussy. It is also OK to dress very provocatively and do sexual moves on stage with other women. If you haven’t seen that part if the most recent Grammy Awards, then check out the screen shot found below.

Because the ‘photoshopped’ fake tweet appeared for the first time ever when Cardi B tweeted it, we can only assume that she herself made it, or had someone else make it for her. The timeline of that is crucial because it will prove that Cardi B was and is responsible for that ‘made up’ tweet. The FAKE tweet Cardi B posted that was made to look like it was tweeted by Candace Owens says “Yes, my husband did cheat on me with my brother. Yes, he said no when I asked to join them.” .. Cardi B used that as retaliatory ammo against Candace Owens. Owens had originally criticized the Grammy performance of Cardi B, which obviously ticked her off. Candace’s tweet said “Millions of young girls follow you. At your best, you are self-deprecating and humorous. At your worst, you are naked, shoving your vagina into another woman’s vagina while thrusting atop her. …” and to be honest, what Owens said is 100% true. But like most screaming liberals, Cardi B would not and could not just let it pass. She just had to retaliate, and with classic liberal fashion by saying the most hurtful, disgusting thing they can think of at the time. Cardi B’s response to Candace Owens not only included that picture of the FAKE tweet, but she also wrote, and I quote, “Not you talking about two women thrusting their vaginas together while your husband and brother slap cocks and balls together. WELL WOULD YOU LOOK AT THAT! wow” (see 1st pic above) … Yeah, I’m just as disgusted as you, BUT NOT SURPRISED. Candace Owens just came out and said she is suing Cardi B. … Thoughts? Please feel free to drop your comments below. 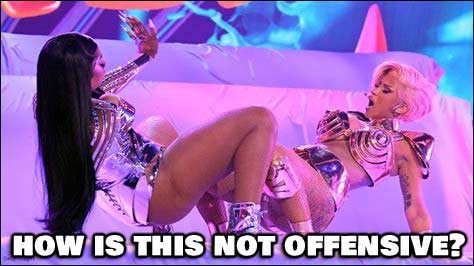 I’m far from being a prude but that is totally disgusting.
I just purchased 4 (banned) books for my great granddaughters. CANCEL CULTURE is destroying our country. Two skanks sexing on TV is ok but cartoons are offensive??? REALLY??? If you don’t like something DON’T BUY IT or WATCH. You have the right to change the channel. WAKE UP AMERICA before it’s too late