School systems across the country are adopting BLM curriculum at an alarming rate, indoctrinating our children to achieve Marxist objectives. 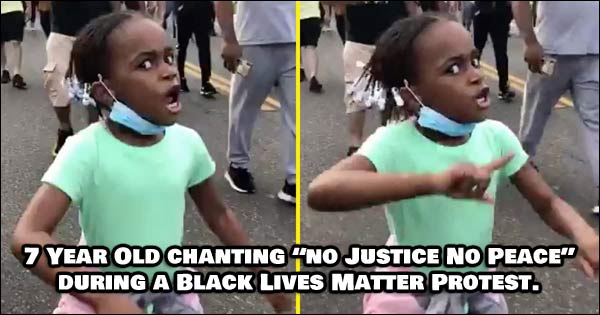 7 year old girl marching in a BLM protest, chanting “No Justice, No Peace.”

New York City is one of many school systems in the United States set to roll out Black Lives Matter (BLM)-themed lesson plans this fall. According to the NYC Department of Education, teachers will delve into “systemic racism,” police brutality, and white privilege in their classrooms.

North Carolina’s largest school system in Wake County launched a website this summer that provides BLM lessons for teachers to use in classrooms and for parents to use at home. The website, created by the school system’s Office of Equity Affairs, encourages teachers to “address the injustices that exist beyond education by the conversations we have with others, by speaking up when we see hate, by supporting efforts that oppose racism and oppression, and by directly engaging in advocacy work.”

Encouraging people to identify and condemn racism is an undeniably laudable undertaking by these school administrators. That’s not what’s really happening, however. By bringing BLM into the classroom, activist educators are allowing the most radically divisive movement in modern American history to warp children’s worldviews.

Wake County’s BLM teaching resource is dressed up as a legitimate civics education resource, complete with tips for fostering civil discourse and a section on teaching historical facts about America’s civil rights movement. But closer inspection reveals it to be a deliberate Trojan Horse conceived to incubate, amplify, and channel the movement’s attitudes for political ends.

The site lays out a cult-like recruiting process for students to follow. Step one: Recognize your white privilege. Step two: Learn the dos and don’ts of being an ally. Step three: Recruit more members to learn steps one and two.

Step three of the recruitment process posits, “Racial equity accountability must be tied to specific outcomes.” What, exactly, are these outcomes? The obvious answer is activism on behalf of the BLM movement.

Splashed across the homepage of the Wake County School System’s website is BLM founder Patrisse Cullors. It is puzzling that a self-proclaimed “trained Marxist,” such as Cullors, would be a role model for the school system’s anti-hatred, anti-oppression curriculum. Do these school administrators realize that Karl Marx’s road to utopia led to millions of deaths at the hands of tyrants?

But it’s not only Cullors’ Marxist bona fides that’s troubling. In a 2018 Democracy Now! interview, Cullors boasted about receiving training from Eric Mann, former member of the Weather Underground charged with attempted murder of police officers in Boston back in 1969. The domestic terror group Weather Underground is responsible for multiple terrorist bombings at the U.S. Capitol, the State Department, and the Pentagon during the 1960s and ’70s.

Since being a terror-sympathizing Marxist doesn’t disqualify Cullors from being the poster girl for new school curricula, her history of antisemitism surely will not deter administrators. Cullors is a vocal anti-Israel activist and close ally of Nation of Islam leader Louis Farrakhan. She accuses Israel of ethnic cleansing and racial brutality. Cullors organized a BLM event in Los Angeles on May 30, during which five synagogues were vandalized with graffiti that read “Free Palestine” and “F-ck Israel,” as were three Jewish schools.

Many forget the BLM platform is antisemitic. The movement’s architects falsely claim there is a link between American police brutality and the Arab-Israeli conflict. The manifesto’s reference to the Jewish occupation of Israel as “genocide” has outraged many Jewish BLM supporters, including Jonathan Greenblatt, executive director of the Anti-Defamation League. Rolling out the BLM platform in classrooms will surely have Jewish parents questioning school administrators’ commitment to combating antisemitism.

KIPP Philadelphia Public Schools has its own plan to “work towards an anti-racist agenda.” Jessica Cunningham Akoto, CEO of the charter school network KIPP Philadelphia, wrote a letter outlining its new plan to focus on “learning mindsets and practices rooted in Black liberation.”

Black liberation is a Marxist theological and social movement that emerged in the late 1960s. It conceives of America as “systemically racist.” Accordingly, America’s institutions are also considered racist and as conceived to perpetuate racism. Moreover, in this view the entire construct of American culture, symbolically represented by the flag, national anthem, and even Philly’s own Liberty Bell, represents an insult to people of color.

Black liberation theology’s most prominent devotee is President Barack Obama’s former spiritual leader Rev. Jeremiah Wright, who famously summed up the movement from his Chicago pulpit: “No, no, no, not God bless America! God d-mn America — that’s in the Bible — for killing innocent people.”

The financial backers of the BLM movement, such as the Ford Foundation and George Soros’ Open Society Foundations, no doubt recognize the value of infiltrating the understructure of our educational system. Through partnering with BLM, school systems across the country are indoctrinating our children to achieve Marxist objectives.