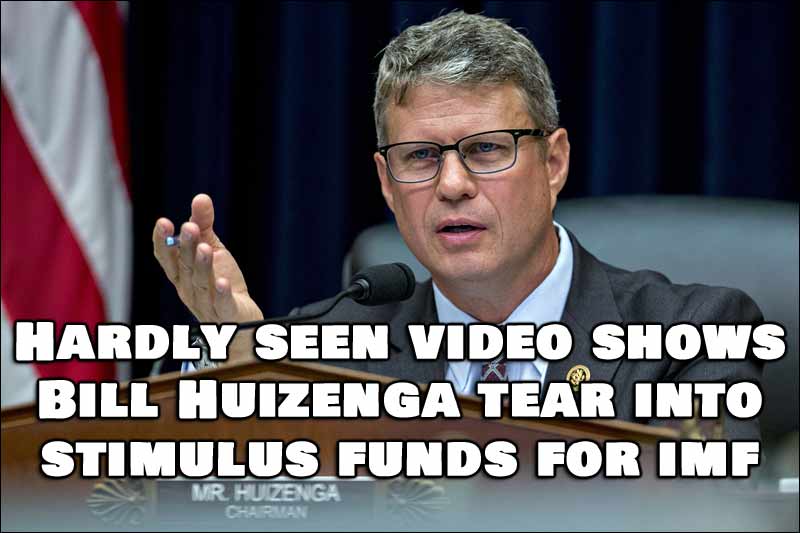 This is older, yes from August 2020 (Video Below). But it reveals what Democrats most definitely don’t want most Americans to know, and that’s where the stimulus funding monies were slated to go with the IMF. In this video, Congressman Bill Huizenga (Michigan’s 2nd congressional district) is on his way to the House to vote on the bill. He explains why he is against the bill and we be voting NO. He also explains how, due to COVID, House Speaker limited them to only 1 minute of Floor time, which was not enough to give his prepared speech. The total run time of the video he released is just under 5 minutes, and it includes a bit of prelude, but he definitely would have had enough time to say all this from the floor of the House. My guess is Nancy Pelosi used COVID as an excuse to limit them all to 1 minute each.

Here’s the speech he was going to give on the house floor (video below), which he ended up giving on the front steps, outside.

“Hey, everybody, this is Bill Huizenga, obviously in Washington, not in west Michigan, hoping to head back home this afternoon. But I got to tell you, I’m going to be walking in for our last vote here momentarily. And I am just flabbergasted that my Democrat colleagues are going to be voting affirmative on this on this bill.“

He continued “And here’s one of the reasons why this is this is this is the state of play where not only are we going into debt for our own country, we’re now going to be going into debt for other countries. And I’m going to I mean, this is kind of a little awkward, but I’m going to read a statement that I had intended to read on the House floor. But the the Democrat majority limited our time this morning to have one minutes. And so I wasn’t able to get that done. So I’m going to do it here with you now. And then we’re going to talk a little bit about this. So here’s here’s my statement that I intend and on the House floor, I rise in opposition to the partisan bill we have been debating the past couple of days under a language inserted at the Rules Committee, the U.S. would direct the International Monetary Fund, the IMF, to lavish three trillion dollars on countries around the world. This is a permanent, no strings attached liquidity for foreign governments. The Democrats bill would therefore send it at least 20 billion dollars to the world’s foremost state sponsor of terrorism, Iran. It means at least 17 billion for the Assad regime in Syria. There’s also more than 170 billion dollars for the Chinese Communist Party as it takes over Hong Kong and builds internment camps and another 75 billion dollars for Russia. Meanwhile, an amendment I offered to prevent Americans banks from financing Iranians who have been sanctioned for terrorism and human rights abuses wasn’t even made in order by the Rules Committee. Strange priorities from the Democrats. It’s obscene to attach billions of dollars for China, Russia and state sponsors of terrorism to legislation that funds our military. I urge a vote no vote on this bill and I’m going to be voting no. And this is this is to fund our military.“

“And we are going to be directing the IMF, which, by the way, I had jurisdiction over at one point when I chaired one of the subcommittees on financial services called the Monetary Policy and Trade Subcommittee. And so I’m very familiar with the IMF, very familiar with the good work it does and very familiar with the bad work that it does. And I’m telling you, directing them to go spend three trillion dollars on countries like China and Iran and Syria and Russia is lunacy. It’s completely nuts. So this is this is a this is a problem. We have to deal with it. I hope the Senate I don’t have great I don’t have great expectations out of Michigan’s two senators, but I’m hoping that someone in the Senate realizes how foolish this is and what we would be doing if if we moved ahead with this. And so, again, no hearing in the committee. It got inserted in at the rules committee. My amendment that would that wouldn’t allow American banks and therefore our deposits as American taxpayers be used to to fund Iranian terrorists was rejected. They wouldn’t even take up my amendment yet. They slid in a directive for three trillion, three trillion dollars. Three trillion dollars of support for countries around the world when we can’t even get an agreement here in the House and the Senate about what we’re going to do with the extension of unemployment or any of the other spending that we’re doing. So anyway, time to take a breath. But I just hope that I just hope that cooler heads prevail over in the Senate and that that they do not go in this direction. So. Well, I’m getting ready to. Sorry, it just dropped. I’m getting ready to walk on the House floor with my Zeland made Permira plastic’s face shield.“

He finished up, “My my friend Noelle ??? and his great team over there pivoted from making automotive parts to face shields and so wearing that on the House floor. But so. Hey, everybody, I hope you have a good weekend. Enjoy a little time out out in West Michigan. But just just keep praying for our country. Keep praying for our government because we need it. We’ll talk to you soon.“

VIDEO of Bill Huizenga from the House Steps

Thoughts? Feel free to drop your comments below.