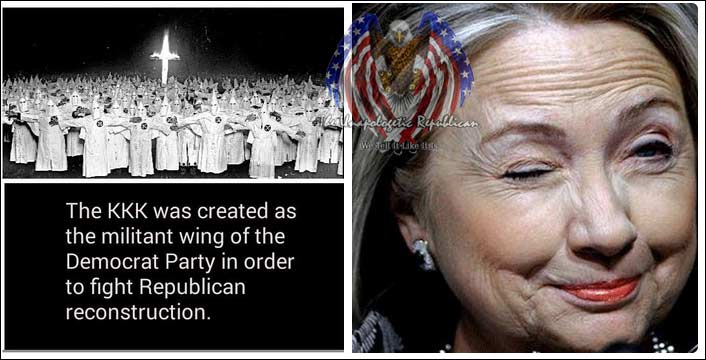 BIGOT. XENOPHOBIC. MISOGYNISTIC. SEXIST. RACIST. These are just a few of the many insults hurled towards Republicans in 2020. We are “the party of hate and division” many Democrats proclaim. But do the facts support the statements? Lets take a look at one of the most racist, hateful, groups of all time (the KKK) and see if it was indeed founded by this so called hateful Republican Party.

So let me preface this next part by telling you I knew very little of the KKK’s origins. I had to dig in and do my homework and be open to having my mind changed if the facts were not as I thought. Here is what I learned and would like to pass on to you.

In 1865 a group of primarily confederate army veterans in Pulaski, TN founded the Ku Klux Klan (KKK) as a social club. The first thing that strikes me about that statement is the fact that most served for the Confederate Army. If you know anything about the Civil War you know the Confederates (South) were battling against the Union (North). The majority of slaves owners in the US at the time lived in the South, and opposed President Lincoln (Republican). It would not be wise of me to assume just because someone lived in the south and fought in the war that it would automatically make them a Democrat, so I think my next best step of action would be to list the founders and then verify their political affiliation. James R. Crowe, John C. Lester, J. Calvin Jones, Richard R. Reed, Frank O. McCord, and John B. Kennedy are the founders of the organization. I looked their political affiliations up and here are the results. In the case of James R. Crowe (Maury voice), you are a Democrat! I will also note as a fun fact he is known for being the author of many famous confederate war songs. In the case of John C. Lester, you are a Democrat! I will skip the semantics and inform you all yes, these guys were all southern Democrats. In fact in 1867 when they elected their first Grand Wizard, it was Nathan Bedford Forrest a confederate general and outspoken Democrat! Facts do not care about your feelings folks, this hateful rhetoric was not only founded by Democrats but it was heavily opposed by Republicans. The Republican-controlled Congress had become overwhelmingly annoyed from the triumphs the KKK was having stopping African Americans and their supporters from voting. In response, Republicans enacted three enforcement acts in 1870 and 1871 to help abolish the extreme violence and voter intimidation. In short folks, facts DO NOT care about your feelings. The history of the Democratic Party is covered in hate, and their supporters today are so blind to it that they perceive their own reality onto Republicans. Remember these facts the next time you think about blindly labeling a Republican Racist. The race baiting and hatefulness has no place in American politics. …. COMMENT BELOW ..

I’m sick of the left’s tactics.. they are truly evil in their doings.. name calling, lies, usurping America’s Constitution… we cant all get
Along as long as the dirty commiecats keep playing games.. I’m proud of President and I’m so happy I voted
For him and will
Again in 2020 🇺🇸 KAG #Trump2020

Love it! But you know the first thing a lefty is going to throw at you is “but—but— the parties switched…” 🙄🙄🙄 Thats their jam.

The demoncraps will never accept the truth because it doesn’t fit their narrative.

They accuse us of they very thing they are guilty of! Blows my mind.

Good article. Unfortunately the democrats don’t work in “facts” these days! Only lies!

Just watch the movie “Hilary’s America” to get a good historical lesson about the Democrats and their hate. No, there wasn’t a “Big Switch” (only one person switched). The plantations became the “inner cities”. Democrats still continue to prostitute African Americans to this day.

Adding to your points, the laws are that serve to free the slaves as well as give them equality under the constitution were unanimously opposed by the Democrat party and overwhelmingly supported by the Republican Party. I would further add that a quick 30 min research into the 20th century segregation laws were incorporated into society by Democrats! Great article, easy to read, short, sweet, to the point.

The BEST indicator of what the Progressive Liberal Left fears the most is… who/what they attack with passion. Thank God for our dearly beloved President, Donald John Trump: MAGA 2020.