Biden’s team wants next Presidential Debate to be virtual, Trump says NO WAY

Biden’s team wants next Presidential Debate to be virtual, Trump says NO WAY 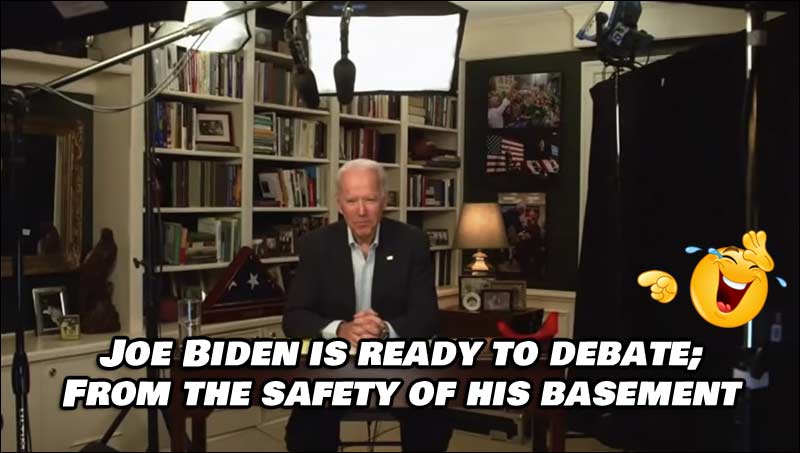 Joe Biden is all ready for the 2nd Presidential Debate of 2020 … From the safety of his own basement. (How can anyone expect this guy go out and lead this country when he won’t even come out for a debate??)

President Trump stated in his first interview following positive coronavirus test that he will not participate in the next debate, shortly after the Commission on Presidential Debates announced the battle, set to take place Oct. 15, will be virtual.

The CPD is intent on having the Presidents debate from remote locations while Steve Scully (C-SPAN) moderates from Miami.

“The commission changed the debate style and that’s not acceptable to us,” Trump said on “Mornings with Maria.” “I beat him in the first debate, I beat him easily.”

The president said he wasn’t going to “sit at a computer” to debate, calling it “ridiculous.”

Joe Biden and the Democrats are clearly trying to set him up to read a teleprompter and avoid major gaffes that have plagued him throughout his campaign.

We see no reason for Biden and his team to refuse the regular debate process, especially if all the precautions taken would meet the same requirements that the Left has been spewing about the Chinese Virus. ‘Social Distancing’ will be adhered to, just like in the first debate. Masks would NOT be necessary since they’d be following the distancing guidelines. … What do YOU think? Should President Trump do the debate virtually? Let us know by commenting below.

No!! The American DESERVE the Conventional Debate!! WHO gives the House Authority to change a Staple of Debate!!!! Since the Very First Presidency!!!! They have No Right, OR Authority!!!!