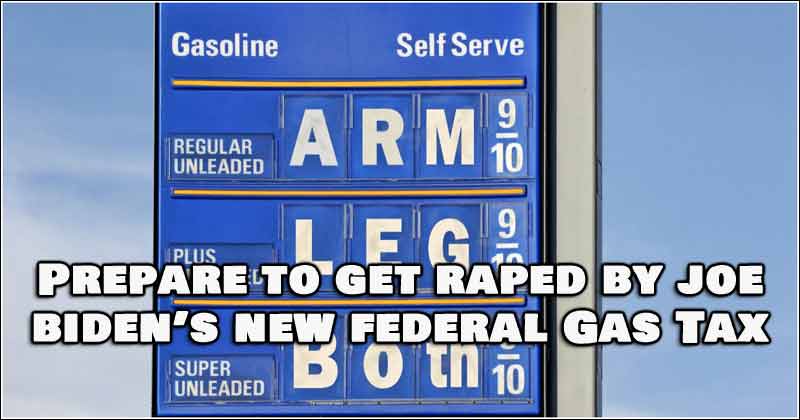 Well, so much for keeping promises. One of the stances Joe Biden took during his campaign was that he promised to help middle and lower class citizens by not raising their taxes. However, as soon as he removed Trump’s tax cuts, it immediately raised everyone’s income tax by an average of 3%. I know that our personal tax bracket went from 15% (before President Trump), down to 12% (which was part of Trump’s tax cuts), and now it’s back up to 15% no thanks to ‘President’ Joe Biden. But that is not the only way he’s broken his promises with taxing Americans. Again, he promised that taxes would NOT be raised for Americans earning $40,000 or less, but here comes the ‘flank’ attack from the blind side. Joe Biden has appointed Pete Buttigieg (a failed Democratic Presidential Candidate) as the U.S. Transportation Secretary, and Buttigieg just laid out his idea and plans to get that monies by another means, and that is a ridiculous new federal gas tax (as if Americans already don’t pay enough in gasoline taxes).

Presently, the Federal Gas tax is just under 19 cents per gallon (18.4 cents to be exact). The state average of the state taxes are 29.8 cents per gallon. Pennsylvania for example, charges 77.10 cents per gallon (highest in the country). California is 2nd highest at 72.76 cents state tax per gallon. The list goes on (Source : https://flexfleetrental.com/states-highest-gas-tax/). Rumors swirled about this new gas tax, State Senators asked Buttigieg what his plans were and he responded “I think all options need to be on the table. The gas tax has not been increased since 1993, and it’s never been paid to inflation. And that’s one of the reasons why the current state of the Highway Trust Fund is there’s more going out than coming in. Up until now, that’s been addressed with general funding transfers. I don’t know whether Congress would want to continue doing that.”

Americans are strapped as it is. For the past year, people have been restricted from working and functioning in a normal fashion. Many people have not been able to make a financial living due to lack of work (from COVID, and the Liberal leaders response to it). A stimulus package just passed which sent more money to other countries than it did to Americans. Biden promised another 1.9 Trillion Dollar stimulus plan, but we are now hearing that it will be pushed back to March. How does the federal government expect Americans to be able to keep up? Buttigieg tried to play it down a bit by using the excuse that electric cars will make the ‘gas tax’ a memory (so this is also a push for you to switch to a hybrid or full electric vehicle) by stating “In the near term, we need a solution that can provide some predictability and sustainability. In the long-term, we need to bear in mind also that as vehicles become more efficient and as we pursue electrification, sooner or later there will be questions about whether the gas tax can be effective at all.” … Thoughts? Drop your comments below.

If you don’t have a job how do you afford a hybrid or electric car
?

For those who hated and wanted Cheeto Man out and voted for Sleepy Joe 30330. Your anger and ignorance will be something that haunts you as this country and people are socialized and demonized.

Who can afford an electric car plus the batteries only last 7 years then it is a high price to replace , these people are living in a fantasy land , how dumb can you really be
But you fools voted for this so now suffer you idiots !!!!

But Joe, “these people”, “you fools” and whatever they/us are called, did not vote for that.