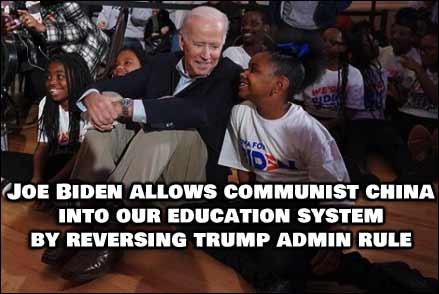 Not long before President Trump left office, he left a list behind of actions that he intended to take, but was unable to enact them due to the sudden ‘yank’ out of office from the 2020 election results that were rammed down our throats. One of those things on that list was a ‘rule’ that would have made it necessary for American schools (included all primary, secondary, and postsecondary institutions) to disclose any and all relationships they may have with Chinese Communist Party-funded Confucius Institutes. A Confucius Institute is a Chinese language program which has been accused by American officials of spreading communist propaganda that is fed from Beijing. Joe Biden just killed that (and all others) rule. As a result, most Conservatives and Republicans are fuming mad due to the obvious ramifications of what Biden just really did. While the Biden administration, and just about everyone on the Left, is cheering at yet another Trump era idea flushed down the toilet, that action now gives the Chinese to sink their nasty little communist fingers into our institutions where we send our children to be taught and molded into young adults.

What could be the logic behind what ‘President’ Joe Biden has done? Is it just the fact that he reversed a pro-Trump action? Does it have anything to do with the Biden family having an already existing relationship with China; a VERY close relationship? Does Biden (and party) not care if China attempts (and succeeds) to influence our younger generations and in-doctrine them with communist ideology? .. Way back before Donald Trump even thought about running for President, he warned us of China. Now, especially due to the past several months, we see this as true and terrifying. In our opinion, the bottom line is Biden is a puppet for the CCP. The Chinese Communist Party has been, and will continue to try to control the entire world if they are given the opportunity. It’s been building for DECADES, and it needs to be stopped now. .. Notice how this bit of news was never mentioned by any major news outlet…. Even Marco Rubio tweeted “@FBI has warned about #China’s Communist Party using #ConfuciusInstitute to infiltrate American schools. But now Biden quietly withdrawn rule proposed by Trump admin to require schools & universities to disclose their partnerships with these agents of Chinese govt influence” … Thoughts?? Feel free to comment below.