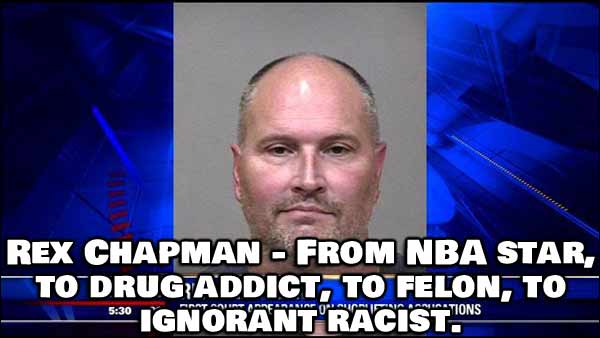 Don’t people read over their tweets before they send them out into the world? Obviously not because we’ve seen a LOT of people get in hot water due to their ignorant tweets, only to delete them later and make some sort of half-assed apology. I’m thinking that Rex Chapman (@RexChapman on twitter https://twitter.com/rexchapman ; Ex-Drug addict and Felon) should have taken a few moments to deeply think about what he was going to tweet, but like most ‘woke’ liberals, he obviously does not care how stupid he appears. And don’t blame me for his stupidity, it’s his words that got him labeled, not mine.

On March 3rd, Rex Chapman responded to a tweet about the GOP being frustrated with HR1 (For The People Act) and the changes the Democrats want to make to the American voting system. Chapman tweeted “Democrats aren’t perfect. But only one party is trying to make it harder for Black people to vote.” The brutal but honest Amiri King immediately took to taking this on. He responds to Chapman by calling him out. Amiri King tweeted “Tell me EXACTLY what white people can do that somehow black people CAN NOT when it comes to voting. You always pander and act like blacks are dumb, helpless, needy, with your constant virtue signaling. The black community should be offended by your constant pandering bullshit.” ….. NO RESPONSE FROM CHAPMAN. Amiri did NOT let up, and I don’t blame him, “Are you suggesting that black people: Don’t know how to use the internet or a post office? Lack drivers licenses? Lack knowledge to access public transportation? Tell me which handicap black people have when it comes to voting and how conservatives are exploiting it. I’m here.” And of course Rex Chapman remained SILENT. No response. 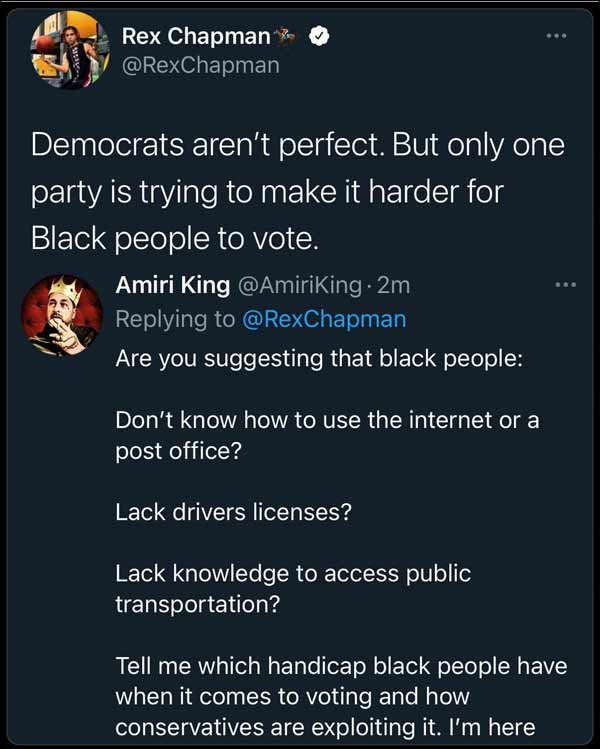 So what exactly did Rex Chapman mean by his ignorant tweet? Since voting was made way too easy for 2020, is he saying that it wasn’t enough for Black people? Some areas still allowed voting in person, so did Chapman mean that Blacks are unable to stand in a line, and/or use a voting booth machine? Is he saying that Black people lack driver’s licenses which prevented them from driving to a voting place, or a mail-in drop box? Or use public transportation? .. Mail-In voting was the norm for the 2020 elections, so is Chapman saying that Blacks are unable to fill out a form? Or did he mean that Black people do not know how use the postal service? Not surprising one bit that Rex Chapman did not respond to any of Amiri’s questions, especially the last point he made “Tell me which handicap black people have when it comes to voting and how conservatives are exploiting it. I’m here.” … As far as I know, it’s March 12th and Amiri King is STILL waiting for Rex Chapman to respond. .. Thoughts? Feel free to drop your comments below.