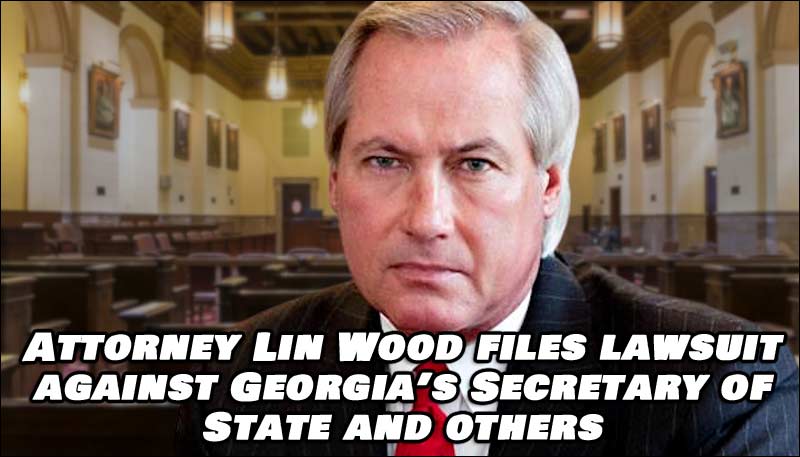 Attorney Lin Wood just did an interview and the information he released is pretty explosive. Lin Wood states that the March 2020 consent settlement between the Secretary of State and the litigation with the Democratic Party substantively changed the absentee voting rules and is 100% unlawful. During the interview, he was asked about why he filed a lawsuit concerning Absentee Voting and here is what he said :

Lin Wood : The lawsuit I filed was against the secretary of state and other appropriate defendants. And it stems out of a March 2020 consent settlement that the secretary of state entered into, in litigation with the Democratic Party. Democratic Party was represented by Perkins Coie. You might also recall Perkins Coie, the Hillary Clinton law firm. But that consent agreement was made substantial changes in the absentee voting rules. You can’t do that. Only the state legislature is permitted to make a change in a federal election conducted in the state. That’s been strongly suggested and will be upheld eventually by Judge Justice Alito in Pennsylvania, even recently by a judge in California, where they tried the same thing with the governor.

Lin Wood : So they changed the rules under the guise of Covid to try to increase the ability of people to vote by mail. And as a result, you’ve got fraud of a massive amount through the mail votes.

Lin Wood : And you’ve also got salt in your computer voting machines. It’s not the first time they’ve done this, what happened this time is Trump won by such a large margin, that they had to go, had to get these mail votes in the middle of the night to try to carry some of the key states, but in Georgia, the election is void and unlawful. It’s going to work through the court system unless the state legislatures take action in advance of the courts because the election is void, there’s going to have to be a new election. They can’t do it for the president. They’re going have to do it through the Electoral College. But every down ballot contest is going to have to be redone. It’s not going to be a run off. There’s going to have to be a new election.

Interview then says : Wow, so, look, I just had Senator Brandon Beach on, state senator, who’s called for a special session, and he said the same thing. He said that the General Assembly, which is the only entity, according to judge law, that can make this change, he said the deal that Raffensperger, the secretary of state, made with Stacey Abrams on this mail in ballot scam, if you want to call it that, he said they were not ever even told about it, like it never even went to them, or they would have said, hey, you can’t do this. And now they’re asking for a special session and the governor is nowhere to be found.

Wood continues : Follow the money. There was also a lot of money that went down when Governor Kemp purchased covid supplies, mask gowns and covid test kits from China. Follow the money. There’s also an interesting money trail before he appointed Kelly Loeffler, a senator and after her appointment. Follow the money. The Governor of the state of Georgia is corrupt. He’s compromised by China money. And that’s why you don’t hear him out there fighting for the people of this state right now who are going to be outraged, and they already are because they know that Trump won this state in a landslide. He won the country by a landslide, may have won all 50 states. And they’re trying to steal our government because they’re going to change our government. You’re going to wake up in a few months and you’re not going to have the United States flag over the White House. It might be a China flag. This is their effort to overthrow our government.

What do you think? Will there be a ‘new election’ in states where the fraud was ‘too much’?? .. Should there be?? …. Drop your comments below.

This has to be one of the worst articles written. The English/grammar is terrible.

It’s transcribed from exactly what he said. It’s word for word what he said so of course it’s choppy. …. Duh!