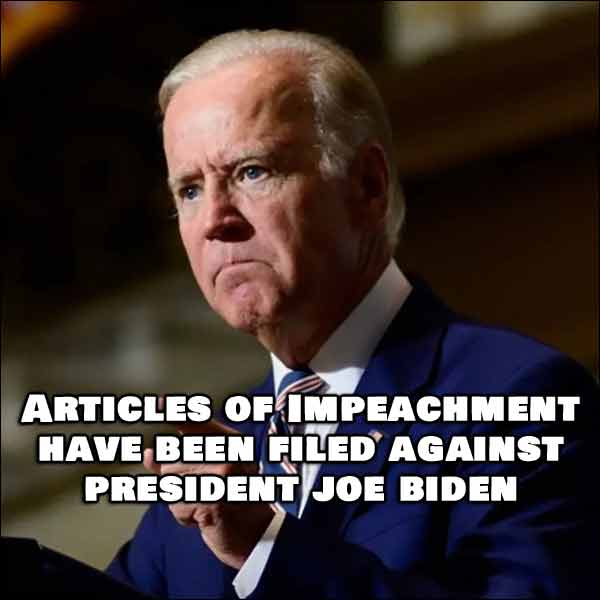 She kept her promise. The other day Congresswoman Marjorie Taylor Greene promised to filed articles of impeachment against ‘President’ Joe Biden, and she came through. Her accusations include corruptness with his ‘quid pro quo’ dealings with the Ukraine, and allowing his son to take advantage of his powerful position by skimming money from 2 of America’s worst enemies, both China and Russia.

“President Joe Biden is unfit to hold the office of the Presidency. His pattern of abuse of power as President Obama’s Vice President is lengthy and disturbing. President Biden has demonstrated that he will do whatever it takes to bail out his son, Hunter, and line his family’s pockets with cash from corrupt foreign energy companies. President Biden is even on tape admitting to a quid pro quo with the Ukrainian government threatening to withhold $1,000,000,000 in foreign aid if they did not do his bidding. President Biden residing in the White House is a threat to national security and he must be immediately impeached.”

The case against ‘President’ Joe Biden is quite deep and specific. Read below :

– Joe Biden abused the power of the Office of the Vice President, enabling bribery and other high crimes and misdemeanors, by allowing his son to influence the domestic policy of a foreign nation and accept various benefits—including financial compensation—from foreign nationals in exchange for certain favors.

– The evidence of widespread knowledge, corruption, and collusion on behalf of the Biden family with foreign nationals is clear and compelling.

– As Vice President, Joe Biden was the senior Obama Administration official overseeing anti-corruption efforts in Ukraine. Hence, any illegal activity involving corruption conducted by Hunter Biden within or in relation to Ukraine would fall under the purview of the Office of Vice President Biden and the Obama State Department’s anti-corruption efforts. In fact, many State Department officials within the Obama Administration repeatedly registered reservations about Hunter Biden’s role on the board of a corrupt company. Thus, any instances of corruption on behalf of Hunter Biden via his role as a board member of the Ukrainian-operated Burisma energy firm were intentionally not investigated or covered up.

– In 2016, Ukraine’s top anti-corruption prosecutor, Viktor Shokin, had an active and ongoing investigation into Burisma and its owner, Mykola Zlochevsky. At the time, Hunter Biden continued to serve on Burisma’s board of directors. According to news reports, then Vice-President Biden “threatened to withhold $1 billion in United States loan guarantees if Ukraine’s leaders did not dismiss [Shokin].” After that, Ukraine’s Parliament fired Shokin.

– During his father’s vice presidency, Hunter Biden built many business relationships with foreign nationals and received millions of dollars from foreign sources, seemingly in exchange for access to his father. The financial transactions which Hunter engaged in illustrates serious counterintelligence and extortion concerns relating to Hunter Biden and his family.

– President Biden gravely endangered the security of the United States and its institutions of government. Through blatant nepotism, he enabled his son to influence foreign policy and financially benefit as a result of his role as Vice President. He supported his son engaging in collusion with Chinese Communist party-linked officials. He allowed his son to trade appointments with his father and other high-ranking administration officials in exchange for financial compensation. He permitted his son to take money from Russian oligarchs, including Elena Baturina, the wife of the former mayor of Moscow.

He did not win the election through fair/honest means…just like his entire political career, lies, corruption, downright cheating by his “base” corrupted this election to steal it away from President Trump as well as many “down ballot” positions across several states

Good lets give out some of there own medicine. Thing is this is all the truth with proof. There impeachment on Trump was all fake. They blame you for what they do themselves.

The article is dead on correct!
The corruption has gone through his time, both in the senate and vice presidential time.

this so called president biden is not a real president, he was not ELECTED he was appointed via the illegal votes, manipulated voting machines ect, along with the highest court in our land pussing out on tryinh this HARD case, and others. so in my eyes he wasnt elected and isnt president, because if the media would have gave air time to all the illegal things that were going on with the bidens i dont think he would b in the whitehouse. kudos to the Congress woman who kept here word unlike all the so called rep that pussed out… Read more »

Lol ..you had 10 likes and I clicked it and it changed to 12..I was thinking this must be linked to Dominion some how…

Why can’t we take out these terrorist like we do in other countries!!

Okay boomer. Who raided the senate? Who killed themselves by tasering their own balls? Lol

I want to see arrests, prison, gallows, the wall 5 marksman 4 bullets, I want the swamp drained and decency brought back into government…with shortened terms of office
These old facts are corrupt lazy bastard please let me have a crack at pelosi *& McConnell

Dead on!! On top of that the rigged election!

Give’m hell like they did President Trump for four years. Only difference here is that Biden IS a crook. Corrupt as heck and stole the election.

This would be wonderful…..but then I realize we’d be stuck with Kamala as President. How to get rid of her kneeling ass?

That is the problem. Than it would be President Harris and who would she appoint

Not if she wants to keep breathing.

Not necessarily. He should not have been allowed to run in the first place as the DOJ knew of these illegal activities prior to the election. That would make the whole ticket invalid for a presidential nominee wasn’t vetted for the election to begin with.

It is going to be Harris anyway..that is their plan…hope this Impeachment gets its hearing and conviction. Tired of these swamp swimming away from their corrupt actions

She would be impeached for holding a federal inmate for 6 months after his sentence was complete so that they could use him for manual labor. Not to mention, her husband worked for D.L. Piper, of which his boss owns stakes in and sits on the board of a voting machine company. One that was used in the 2020 Election. And then we would get Piglosi and we could have her ass impeached for,”Inciting the Antifa/BLM Riots last summer”. Withholding Pandemic Assistance bc she was waiting for the next administration to approve it. Shall we keep going. . That’s what… Read more »

Impeach her too for inciting riots by saying they should not quit!! And by posting bail for them. Yup- check it out. She also said “I’m telling you -It’s a movement and they should not- we should not (not meaning her!!!) stop. It’s on tape. She has already proven she’s not with America!! And she just swore to uphold the Constitution- what a phony . Get her out.!! That leaves Nancy and the 25th will take care of her.

The same way for her part is all the corruption with the Bidens and foreign countries….bailing out rioters, etc….

And Pelosi as vice…wow.. Maybe this was their plan all along cuz it surely wasnt to keep Biden…

I’m more worried about Haras than any other POS politician because she’s never seen it except from a prone position.

So proud of Marjorie following-up and submitting Biden’s impeachment paperwork.
I have the most respect for her; more spine than any other Republican.
too many Republicans are part of the swamp and have no care for the American people or our country.

thank you for your wonderful work.

What goes around, comes around. Only difference is there is evidence for Biden’s Impeachment. No evidence for Impeachment on President Trump per the State Capitol per the stampede of Jan 6! Was not a riot.

Harris needs to be empeached for insighting rioting

Joe Biden is not lagitimate. Plus all the things he and his son did with china. They most certainly tried to impeach Trump for but are guilty of. Green is right to do this. It will keep them busy trying to defend themselves.

Thank this BRAVE Congresswoman. Its about time someone stood up to this criminal and the rest of their cabal. I still don’t understand how he became president and how the congress certified an election BEFORE EVIDENCE OF CHEATING WAS HEARD BY AMERICA AND THE WORLD. We ALL know the election was stolen, we ALL KNOW Biden and Harris are Corrupt as far as they come, and WE ALL WANT THEM EXECUTED FOR TREASON.

Great. It won’t go anywhere in Pelosi’s House, but at least it will get in the Congressional Record —unless it’s censored for not conforming to Community Standards — for some arcane historian to dig up in about a hundred years.

I Love Me Some Marjorie Taylor Greene<3<3<3

It is 100% accurate, my only wish is that you’d held off until they finished with Trumps impeachment. This may hurt him by forcing them to push harder to complete it.

Even if they remove him. You will still have corrupt people taking over. Have to wonder, who is worse?

I could add partaking in a fraudulent scheme to benefit himself to be President The United States of America. With knowledge of terrorist groups wracking havoc and destruction on United States Cities and property.

It’s about time they get a taste of there own medicine, every America they support the real president need to make sure they go to jail all of them,CLEAN the swamp once and for all,new beginnings,God bless America

It’s completely accurate with evidence but i think the corruption is wide spread enough they will squash it. I admire her and she kept her word, which most politicians don’t. With the exception of a select few everyone is too worried about kissing B’s butt, they won’t work/agree with her.

Go after his ass and file on Pelosi for treason by ripping up legal documents in front of America!! If u file on behalf of 75 million I promise u we will all come to hearings!!

This is simple…those involved in the corruption over all the past 50 years and the most recent have dug their own trap and that trap was the 2020 election. That act alone cleans out all in the swamp whether they be Democrat or Republican or Independent or Green party. The truth comes out and unseats them all and puts real Americans in office again just like our forefathers, everyday citizens that want to do right by the citizens of America while doing God’s will.

It’s Treason: Please keep this in mind, that all those involved in the 2020 Election fraud knowingly committed treason against the United States of America…”Treason against the United States, shall consist only in levying War against them, or in adhering to their Enemies, giving them Aid and Comfort. No Person shall be convicted of Treason unless on the Testimony of two Witnesses to the same overt Act, or on Confession in open Court.” Ruby Freeman and Joseph Biden both in video openly confessed to participation in voter fraud in the 202 election which was funded by China, Venezuela, and other… Read more »