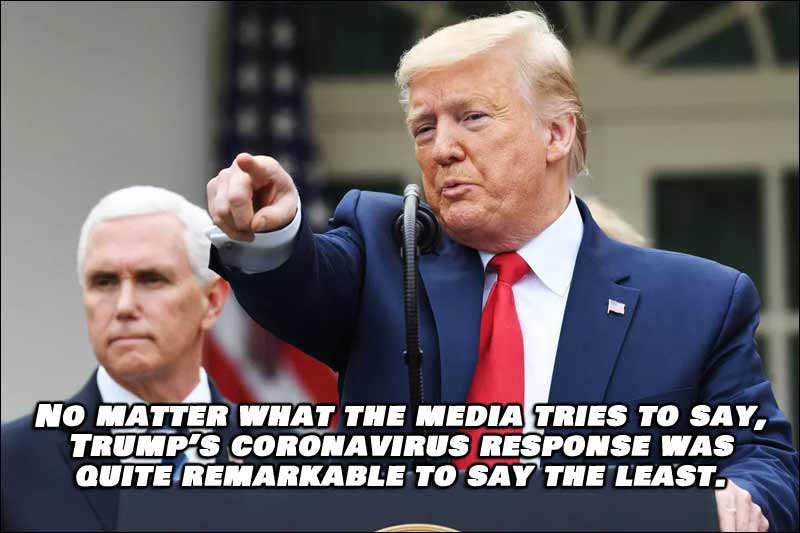 The next time someone spews some nonsense that Trump did nothing to stop Covid-19 and is responsible for 200,000+ deaths, hit them with these facts :

➼ After Trump in January declared a “humanitarian and security crisis” during a prime-time Oval Office address, Sen. Chuck Schumer, speaking beside House Speaker Nancy Pelosi, said Trump was working to “manufacture a crisis, stoke fear and divert attention from the turmoil in his administration.” Party leader Tom Perez also called it “manufactured.” Rep. Alexandria Ocasio-Cortez, D-N.Y., described it as a “‘crisis’ that doesn’t exist.”

➼ Jan 11-13: The first known coronavirus death is reported by Chinese state media. 41 confirmed deaths and the first case outside of China is confirmed in Thailand.

➼ Sen. Elizabeth Warren tweeted at the time that “we’re not falling” for the “fake crisis.”

➼ Jan 14 – the WHO (World Health Organization) sent out a tweet declaring that there is no evidence of human-to-human transmission of the COVID-19 virus.

➼ Jan 15 The House of Representatives votes to send articles of impeachment to the Senate. Pelosi and House Democrats celebrate with a signing ceremony featuring commemorative pens.

➼ Jan 24 – Dr. Anthony Fauci National Institute of Allergy and Infectious Diseases (NIAID) Director said – “ Covid 19 It isn’t something the American public needs to worry about or be frightened about, because we have ways of preparing and screening of. It’s a very, very low risk to the United States, but it’s something that we as public health officials need to take very seriously,”

➼ Jan 29 President Donald Trump forms the Coronavirus Task Force. It is an United States Department of State task force that “coordinates and oversees the administration’s efforts to monitor, prevent, contain, and mitigate the spread” of coronavirus disease.

➼ Jan 29 U.S. senators begin two days of questioning in the impeachment trial; Joe Biden in a speech in Iowa said that Trump’s idea of restricting travel from China was “Xenophobic”.

➼ Jan 30: The State Department issues a Level 4: Do Not Travel Health Advisory for all of China. The CDC issues their own warning, saying travelers should “avoid all nonessential travel to China.”

➼ Feb 2 – New York City Health Commissioner Dr. Oxiris Barbot, “The risk to New Yorkers for Coronavirus is low and our preparedness as a city is very high. There is no reason not to take the subway, not to take the bus, not to go out to your favorite restaurant, and certainly not to miss the parade next Sunday. I’m going to be there.”

➼ Feb 24 Nancy Pelosi says from San Francisco’s China Town to come visit, it is safe and “there are no Coronavirus concerns”. Then SF became one of the epicenters of the disease.

➼ Feb 29: The Trump administration rolls back Obama-era regulations in order to speed up testing.

➼ Mar 2 Bill DiBlasio: “I’m encouraging New Yorkers to go on with your lives. Get out on the town despite Coronavirus.”

➼ Mar 9 Bernie Sanders said he would NOT, I repeat he said he would NOT shut down travel from March 20, MSNBC’s Rachel Maddow (as well as NY Times) bash Trump for talking about Hydroxy Cloroquin calling it a “fairy tale” and giving people false hope. Now it is being sought after to fight the disease and is being tested as helping patients recover faster.

That’s about it! Pretty remarkable if you ask me. Although the haters will go on hating, and liars will keep on lying. … Have an opinion? Drop you comments below.

Hi. I did an internet search to find when Pelosi/Schumer accused Trump of “manufacturing crisis” etc. the only reference I can find is in regards to the crisis at the border. I may have missed it. Can you give me a specific contemporaneous article, YouTube or commentary? Thanks.