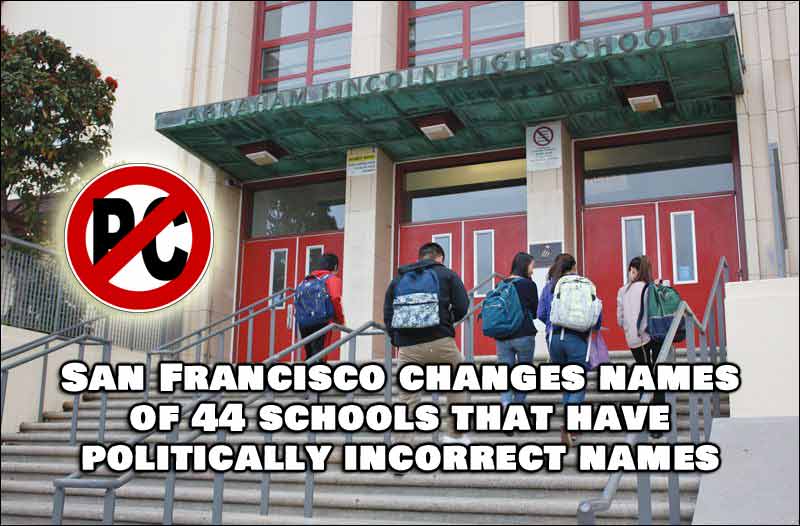 As of this moment, there are 44 (forty four) schools located in San Francisco that contain the names of past American leaders and heroes, who are now deemed politically incorrect due to their ties to slavery or some other non-PC reason. School names that contain the names of Presidents Abraham Lincoln, Thomas Jefferson and George Washington are now all banned and will have their names changed. The Left is so hell bent on removing ‘offensive’ material that they are not even sure of what they are removing, the San Francisco Chronicle stated in a recent article that “In one instance, the committee didn’t know whether Roosevelt Middle School was named after Theodore or Franklin Delano.” So instead of researching it to confirm which person it’s named after, they’ll just change it anyway.

Let’s just forget about the virus plandemic still going on, let’s forget about the fact that many Americans are out of work and can not put food on the table, and let’s get pissed at a bunch of school names and shake the foundations of this country until the names are changed to something less offensive. .. This is the mind-set of the Left .. This is what they are more concerned with; Changing School names that contain the names of past Presidents who had some sort of relationship with slavery. If you go so far as to label Abraham Lincoln as ‘offensive’ then shouldn’t every other living human being be one too? Didn’t Lincoln’s actions FREE the slaves? Other ‘offensive’ names that are on the list with those Presidents include Catholic Priest Junipero Serra, Francis Scott Key (author of the Star Spangled Banner), and John Muir (aka John of the Mountains or Father of the National Parks; He was an advocate for the preservation of wildernesses in the United States) … See Full List Below :

Here are the list of school names the San Francisco School Board has approved to change :

THOUGHTS On this subject? Please feel free to drop your comments below.

All the more reason not to let your children attend any school run by these socialists/communists. But true patriots need to protest at the same time by contacting these traitors and telling them that what they are doing is un-American.

Oh yes let’s make one Caitlyn Jenner high school, or Goerge Floyd high (fentanyl funded), ooh ooh… Bernie Sanders elementry… how lame is california becoming…they are begging for tree seeds right now…fires happen when you remove 93% of the water from the land…DUH! I hope it slides off into the paciffic

I scrolled through quickly and Dianne Feinstein Elementary was the only one that seemed not politically correct. Possibly a sewage treatment plant or landfill would be more appropriate use of her name.

I bet we can rename them Pelosi, Biden, Carter, Zuckerberg, Soros, Clinton, Schumer, Romney–need I go on?

So lets start naming the racist Black names, Like MLK school, that way you’ll have drive by shooting just like on his BLVD!