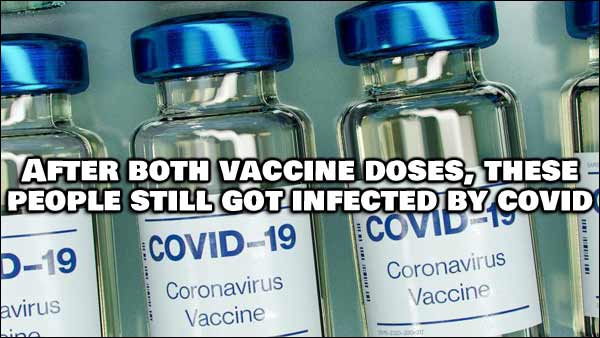 So it appears as if the vaccines that have become available in the United States have already proven that they do not effectively prevent you from getting infected by the China Virus, or any of its variants. At least that is what we are seeing and here now is a report of the 2nd time I personally have heard of this. This all came to light on February 15th, 2021 when 4 residents of the state of Oregon were diagnosed with being infected by the China Virus. The ‘strange coincidence’ between all 4 people was not only the fact that they all had already received both the vaccine’s first dose and then the second dose, but that all 4 got infected AFTER receiving both doses of the vaccine. It has not been stated which manufacturer vaccine was involved and we are trying to find that out.

Health officials in Oregon are downplaying the situation though. During a press conference, Dean Sidelinger, who is an Oregon Health Official, called the first 2 cases ‘breakthrough cases‘. Calling them that definitely downplays the seriousness of the situation. To turn a blind eye and blow it off as ‘wildly unheard of’ is outrageous. He may have wanted to say or meant “breakthrough infection“, which Wikipedia has the definition as ‘case of illness in which a vaccinated individual becomes sick from the same illness that the vaccine is meant to prevent. Simply, they occur when vaccines fail to provide immunity against the pathogen they are designed to target‘. Which to me STILL needs to be investigated. There’s been those 2 cases reported in Oregon counties Yamhill and Lane. Two (2) addition cases have been already found also in Oregon, bringing the total to 4 people, and that number IMO is going to grow.

It turns out that the state of Oregon was the first state to report a ‘patient’ showing positive for the virus 14 days after getting the 2nd vaccine dose. The health officials there though continue to play it down, now referring to all 4 cases as ‘breakthrough cases’. The same officials are boasting a 95% success rate (meaning the vaccine worked in 95% of the people who received it .. But what does ‘worked’ mean? They can’t get or transmit the virus EVER?? Strange how they never elaborate on how the vaccine ‘worked great!’). .. But what about the other 5%?? What happens to the other 5% of the people? .. That 5% is MUCH MUCH MUCH higher than the fatality rate of being infected with the virus, so to me it all doesn’t make sense. It sounds as if the vaccine has as much risk in it as the virus does, if not more.

Oregon health officials continue to play it down when asked. Sidelinger then went on to mention how the new virus cases are showing up as the UK variant B.1.1.7. He stated “We’ve found that the more transmissible variants from the U.K. are showing up in Oregon. Other variants may follow.” … Which will give them an excuse to keep pushing their fear mongering. “New virus, because it’s a new strain, present vaccines not working, keep wearing your masks, keep social distancing, keep everything locked up and shut down, stay home.” … When will it end?? … What do we need to do to stop people from using the virus and the vaccine as a weapon? .. Please feel free to drop your comments below.

All for a virus with more than 99% survival rate. Why are we living in fear. It’s unprecedented and a natural progression with the more liberal/progressive state of this nation. And the sheep tolerate it. THAT’S the problem!

I don’t think any vaccine is effective. It serves only to force a totalitarian agenda & further the misery of the world population. It’s speed at which the vaccine was developed is highly suspect..as if it was all planned in advance….way in advance. I smell the stench of leftist elitism at every move in this whole ordeal & the losers are again…innocent people.