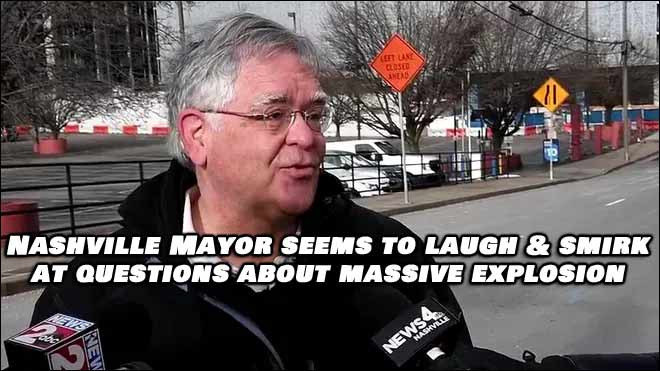 Yesterday morning at about 6:30AM there was a huge explosion on the streets of Nashville, Tennessee. The police are calling it an intentional act. The story, as it has come out so far, was that there was an RV (described as ‘an old white motor home’) parked in a ‘strange location’ which began to announce over a PA System that an explosion was going to happen and to clear the area. The message echoed through the streets “If you can hear this message, evacuate now.” (Video below)

Three civilians were hospitalized and are in stable condition, officials said. A report this morning stated that they found what is believed to be human remains, and human tissue. Metro Nashville Police Department Chief John Drake said the ’tissue’ found is presently being tested to see if it is human or animal.

VIDEO (You can hear the ‘warning message’ from the White RV)

Now, if this all was not ‘strange’ enough, when Nashville’s Mayor John Cooper was questioned, his responses were quite ‘strange’ themselves and it actually appears as if he ‘laughs’ and ‘smirks’. Now I understand that people all handle stressful situations differently, but this is supposed to me a Mayor of a major city. Residents in his city are supposed to be able to turn to him for trust and support. … Watch the video below and watch him ‘smirk’ as he says “Still a week to go [in 2020]…It seems intentional but it seems to be a one-off event. In a year that’s had everything else, let’s add an explosion to it.”

Now that seemed strange, didn’t it? .. What do YOU think happened in Nashville? Please let us know in the comments below.

He knew the explosion was going to happen. Laughing at this situation is not normal. I bet he is a democratic

AT&T Building was the Target 🎯 of this explosion. They had WON the BID to do the FORENSIC AUDIT on the DOMINION SERVERS ❗❗
The Dominion Servers were INSIDE the ATT Building, along with the SUPERCOMPUTERS which were tasked with the FORENSIC AUDIT.
Obviously, the GOAL was NOT to KILL but rather, to DESTROY EVIDENCE of the ELECTION FRAUD ❗❗❗

This POS needs to be held by his ankles from his office window until he’s talks. He knew the plan, thats obvious because he is a REALLY BAD actor!