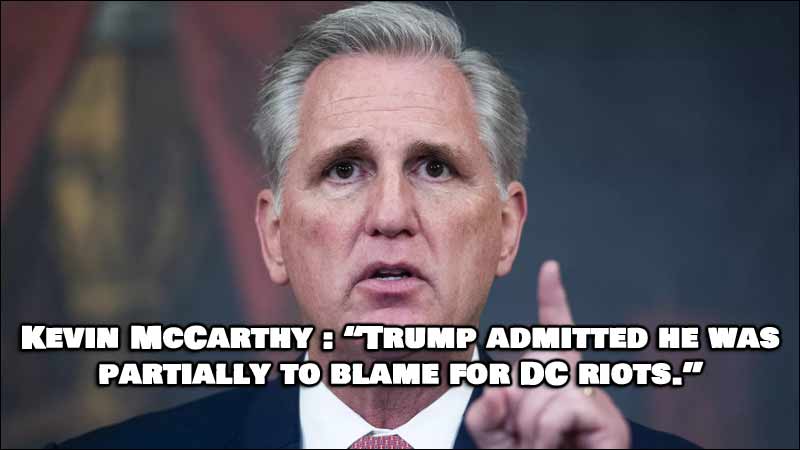 According to house Minority Leader Kevin McCarthy, President Trump admitted yesterday that he is at least “partially to blame” for what went down at the US Capitol last Wednesday. McCarthy was playing pigeon so to speak, relaying the message from Trump to other House Republicans. There is no actual recording or transcript of this ‘message’ that we were able to find. Is McCarthy lying? You be the judge.

The conversation allegedly went down on the same day that Trump had his first face-to-face meeting with Vice President Mike Pence since everything transpired. This conversation is also in wake of an upcoming vote by the House set to call upon Pence to invoke the 25th amendment with Cabinet secretaries to remove President Trump from office. If this is not finalized, The House is expected to vote Wednesday on an article of impeachment against President Trump, ultimately attempting to hold him responsible for the events that led to at least one preventable death, and several medical emergency deaths.

In the end no matter what your view of McCarthy is, he ultimately holds the right sentiments stating he is not for impeachment, citing that it will be ineffective in uniting the people. We certainly do not support one of the greatest Presidents to ever occupy the Oval Office getting removed.

We would love to hear if you (our audience) feel McCarthy’s word should be trusted, or if he is deep state trying to make Trump look bad with his claim. Let us know in the comments below.

I agree with no impeachment!

Why would he admit to something he didn’t do?

He did not do anything wrong. McCarthy plays to please both sides. And of curse he didn’t admitted to anything.