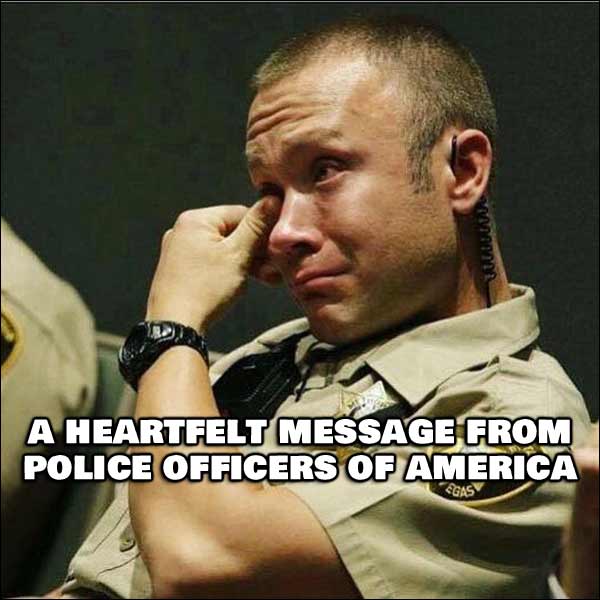 I just found this and I know it’s not new. In fact I think it’s from sometime in late 2018, but it’s still so relative today that I had to share it. Please forgive me if you’ve read this before, but maybe your friends and family have not seen it, so feel free to share it and also feel free to leave your comments below. … A Message From Police Officers Of America :

“I have pulled dead, mangled bodies from cars.
I have lied to people as they were dying.
I said you are going to be fine as I held their hand and watched the life fade out.
I have held dying babies. Bought lunch for people who were mentally ill and haven’t eaten in a while.
I have had people try to stab me. Fought with men trying to shoot me.
I’ve been attacked by women while I was arresting their husband who had just severely beat them.
I have held towels on bullet wounds.
Done CPR when I knew it wouldn’t help just to make family members feel better.
I have torn down doors, fought in drug houses. Chased fugitives through the woods.
I have been in high-speed car chases.
Foot chases across an interstate during rush hour traffic.
I have been in crashes. Been squeezing the trigger about to kill a man when they came to their senses and stopped. Waded through large angry crowds by myself.
Drove like a madman to help a fellow officer. Let little kids who don’t have much sit in my patrol car and pretend they are a cop for their birthday.
I have taken a lot of people to jail. Given many breaks. Prayed for people I don’t even know. Yes, and at times I have been “violent” when I had to be. I have been kind when I could.
I admit I have driven to some dark place and cried by myself when I was overwhelmed.
I have missed Christmas and other holidays more than I wanted to.
Every cop I know has done all these things and more for lousy pay, exhausting hours, and a short life expectancy.
We don’t want your pity, I don’t even ask for your respect. Just let us do our jobs without killing us”
– Thank You Police Officers of America

I think the letter is just written in general from a single officer. As far as I could find, there is no exact organization named “Police Officers of America”. I think the author just meant that the message is from ALL police officers through-out America in general. … Thoughts? Don’t forget to comment below.

I 100% salute you, to any Local Police, Sheriff’s Deputy, State Troopers, Federal Law Enforcement, & to Specialist in your field. Thank You, is not nearly close enough for the work you have done.

Tribute to every service officer, you really deserve all of our respects. May God save you all