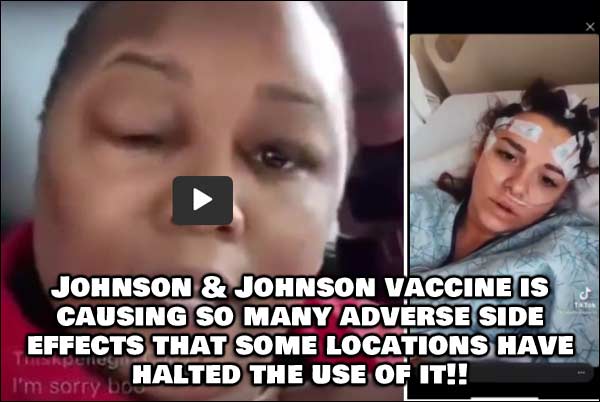 **UPDATE** The state of Georgia just became the 3rd state to temporarily shut down a Johnson & Johnson vaccine site after 8 people suffered adverse reactions to the shot, including dizziness, nausea and fainting.**

There’s been at least 2 different Johnson & Johnson vaccine sites that have either temporarily halted, or completely shutdown, the administration of the J&J vaccine due to the number and severity of adverse reactions people were experiencing. A vaccination site in Wake County, North Carolina, has temporarily stopped all operations on Thursday after 18 adverse allergic reactions to the Johnson & Johnson CCP virus vaccine were reported. At least 4 of those people have been admitted to a hospital for further evaluation and care. (Source : https://www.theepochtimes.com/vaccination-site-halts-operations-after-adverse-reactions-to-johnson-johnson-vaccine_3768802.html). But this is NOT the only case of serious reactions to the Johnson & Johnson vaccine; There’s more.

In Colorado, there have been 13 (so far) individuals that have experienced adverse reactions to the Johnson & Johnson vaccine, right after getting the vaccine. Medical authorities there have not broken down the types of adverse reactions people are having, but we can see what some are from the other locations that have temporarily ‘closed shop’. Most have been severe allergic reactions, but everyone’s body reacts differently. (See the 2 different videos below). According to FoxNews (https://www.foxnews.com/health/covid-19-vaccination-site-shuts-down-after-adverse-reactions-to-johnson-johnson-shot-report-says), the vaccination site this happened at was a Dick’s Sporting Goods location that had already injected over 1,700 people before they stopped. The liberal left is trying to tell us that this is OK; it’s “less than 1% of the people that got the vaccine”). Do they not realize that the vaccine seems to be more “iffy” than the actual virus?!? Diamond and Silk were just talking about this, “More people have died from taking this one vaccine within the past 3 months, than people who died from taking a vaccine within the last 10 years combined.” (https://www.diamondandsilk.com/covid-19-vaccination-site-has-shut-down-due-to-harmful-reactions-to-the-johnson-johnson-shot-according-to-report/)

But wait, there’s more! Here’s 2 videos that 2 different individuals recorded of themselves AFTER receiving the Johnson & Johnson vaccine. This first woman in the first video (found below) has experienced “Chest Pain, Paralysis, Seizures” and recorded her video from her hospital bed. In the video, you’ll see & hear as she explains “I got the Johnson & Johnson vaccine yesterday. Nobody knows if this is the reason that all this stuff is going on.” Lauren explains it “Started with chest pain, paralysis on my left side. I was rushed over via ambulance to [Baylor University Medical Center] where I have had numerous scans done. I have had about eight seizures in the last two days – never had a seizure before. They did find a 3mm brain aneurysm. I am currently hooked up to my EEG so they can monitor my seizures.” In a follow-up video, Lauren says she began suffering seizures nearly two-and-a-half hours after receiving the vaccine, in addition to having a 102° F fever.

In this 2nd video (below), another woman with severe allergic reactions to Johnson & Johnson vaccine explains what happened.

THOUGHTS?? Please feel free to drop your comments below.

their bodies are reacting to the MRNA