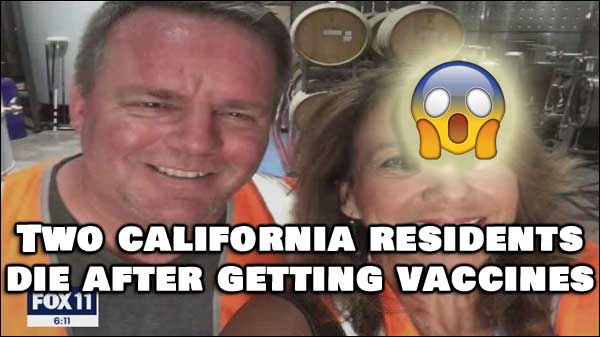 The first death happened to Timothy (Tim) Zook, a 60 year old X-Ray technician in Orange County. Tim Zook worked in the medical field as a X-ray technologist at South Coast Global Medical Center which is located in Santa Ana, California. It was back on January 5th when he received his 2nd dose of the Pfizer / BionTech vaccine for COVID-19. He even went as far as to post his achievement proudly on social media as a picture of his vaccination card, along with the text “Never been so excited to get a shot before. I am now fully vaccinated after receiving my 2nd Pfizer dose.“. But what happened next is terrifying. Within 2 (two) hours of receiving that 2nd dose of the vaccine, Tim Zook began to feel very sick. According to his family, he started to have pain in the stomach area and was finding it difficult to breathe. His conditions continued to get worse and by the 4th day, Tim Zook had died. His wife Rochelle explained “The doctors believe that his body reacted to something after he took the vaccine and they called it an inflammatory reaction. It was so intense that it started attacking major organs and he never had a chance to recover.” Presently, the coroner has stated that the COD (cause of death) is inconclusive. He added that additional toxicology testing will probably take months to complete.

When asked about his overall health, his wife said that he was in good shape. He was slightly overweight, and did have high blood pressure, but nothing else other than that. She also told reporters that Tim supported the vaccine and thought it was going to be a good thing for everyone. Little did he know what lay ahead .. His wife though refuses to put any of the blame on the vaccine, or any if its manufacturers. “He believed in vaccines. I’m sure he would take that vaccine again, and he’d want the public to take it.” She went on the say that she believes more research needs to be done, especially in the cases where people are having severe reactions to the vaccines. Obviously they can range from slight reactions to being fatal. His family STILL believes in the vaccine and that people should continue to take it. His wife said “The message is: Take the vaccine because it is far more greater to die from COVID than to die from a result of a vaccine.“

His death was NOT the only one in California that is somehow linked to a COVID vaccine. Just about a week ago in Placer County, someone (not Tim Zook) had passed away only hours after getting their COVD-19 vaccine. The manufacturer was not mentioned. This person had originally tested positive back in the end of December, and eventually got the vaccine on January 21st, 2021. They died only hours later. Their name has NOT been released, but the Placer County Sherrif-Cororner Division released this statement “There are multiple local, state, and federal agencies actively investigating this case; any reports surrounding the cause of death are premature, pending the outcome of the investigation.“

This only helps to confirm my suspicions about this untested, experimental, “vaccine “. You can go get injections of this poison if you want to, I’m going to have to decline to be a human guinea pig.

I don’t understand why it’s better to die from an unproven vaccine than Covid-19. Blind sheep led by blind guides. Quit drinking the kool aide!

The wife is a dipshit. Not blaming the vaccine? She probably was paid off already by the chi-coms.

I read the mfg’s website some weeks ago, after CVS had no answers I needed. It said expect deaths weeks to months after vaccine is given. I will happen, it said. But, don’t blame the virus. Of course not, just what the body does to your body! Rhe nRNA vaccine enters your cells, immune system does not see it as foreign. However, first exposure to any other strain, and your immune sys goes into overdrive, attacks your body and organs now points of COVID19, and you die from your immune system, which was fine prevaccine!

Know I will not take vaccine for a disease that is 98% curable why?

You are being used as experiments by the NWO, to kill you now and or kill you off later, Most viable vaccines known to be safe have taken 5 to 7 years of Trials to be declared safe for human consumption! You r being conned in a political game by a bunch of con artist politicians who dont know Shit about shit! Wake the fuck up people!

Ok, america, u r being trained to be muslim sheep, keep lining up for a BS vaccine, produced in 20% of the normal time required for a safe Vaccine, but the american sheep keep lining up to be murdered by dumb ass political game by dumb ass know zero /nothing asshole fast talking con artist politician grifters living off your tax dollar backs! Open your eyes people u r being played like chess pieces in a Con Artist money game! Save your life, throw the mask away, The pollutents u r sucking in everyday will kill u faster then any… Read more »

The virus and the vaccine are both owned by Gates, Fauci, and others we can not identify. They have a known desire to lower the world’s population. ANYONE taking one of these vaccines is a total FOOL.

Count me as a NO.

I have had four anaphylactic attacks which were terrifying – my whole face and throat swelled up so I couldn’t breathe and the last one took effect in less than a minute of swallowing some cough medicine. My doctor told me that the next one will kill me, so No I won’t be volunteering to have this vaccine.

He obviously had an anaphalasic shock allergic reaction.i know all about them.i had one once that almost killed me.anyone who has ever had an allergic reaction of any kind / has auto immune disease/ has had a flu vaccine in past 10 years should not get this covid jab.

I’m a nurse, and usually very pro-vaccine. I do not plan to get the Covid vaccine at this time, and am discouraging my husband from doing so. I think we may be safer from the virus than we will be from the vaccine – any of the versions.